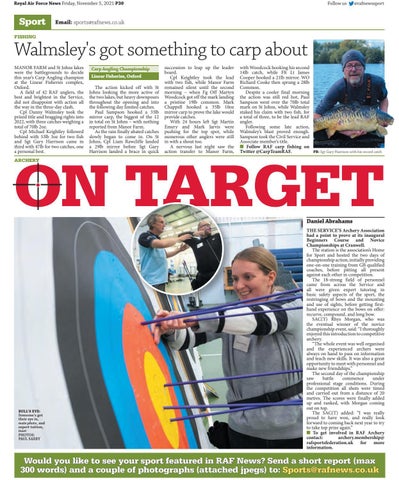 Walmsley&#39;s got something to carp about MANOR FARM and St Johns lakes were the battlegrounds to decide this year’s Carp Angling champion at the Linear Fisheries complex, Oxford. A field of 42 RAF anglers, the best and brightest in the Service, did not disappoint with action all the way in the three-day clash. Cpl Danny Walmsley took the prized title and bragging rights into 2022, with three catches weighing a total of 70lb 2oz. Cpl Michael Keightley followed behind with 53lb 3oz for two fish and Sgt Gary Harrison came in third with 47lb for two catches, one a personal best.

Carp Angling Championship Linear Fisheries, Oxford The action kicked off with St Johns looking the more active of the two lakes, but heavy downpours throughout the opening and into the following day limited catches. Paul Sampson hooked a 33lb mirror carp, the biggest of the 12 in total on St Johns – with nothing reported from Manor Farm. As the rain finally abated catches slowly began to come in. On St Johns, Cpl Liam Rawcliffe landed a 29lb mirror before Sgt Gary Harrison landed a brace in quick

succession to leap up the leader board. Cpl Keightley took the lead with two fish, while Manor Farm remained silent until the second morning – when Fg Off Martyn Woodcock got off the mark landing a pristine 19lb common. Mark Chappell hooked a 35lb 10oz mirror carp to prove the lake would provide catches. With 24 hours left Sgt Martin Emery and Mark Jarvis were pushing for the top spot, while numerous other anglers were still in with a shout too. A nervous last night saw the action transfer to Manor Farm,

with Woodcock hooking his second 14lb catch, while Flt Lt James Cooper hooked a 21lb mirror. WO Richard Cooke then sprung a 28lb Common. Despite a cooler final morning the action was still red hot, Paul Sampson went over the 70lb total mark on St Johns, while Walmsley staked his claim with two fish, for a total of three, to be the lead RAF angler. Following some late action, Walmsley’s blast proved enough. Sampson took the Civil Service and Associate member’s title. ■ Follow RAF carp fishing on Twitter @CarpTeamRAF.

ON TARGET PB: Sgt Gary Harrison with his record catch

THE SERVICE’S Archery Association had a point to prove at its inaugural Beginners Course and Novice Championships at Cranwell. The station is the association’s Home for Sport and hosted the two days of championship action, initially providing one-on-one training from GB qualified coaches, before pitting all present against each other in competition. The 18-strong field of personnel came from across the Service and all were given expert tutoring in basic safety aspects of the sport, the restringing of bows and the mounting and use of sights, before getting firsthand experience on the bows on offer: recurve, compound, and long bow. SAC(T) Rhys Morgan, who was the eventual winner of the novice championship event, said: “I thoroughly enjoyed this introduction to competitive archery. “The whole event was well organised and the experienced archers were always on hand to pass on information and teach new skills. It was also a great opportunity to meet with personnel and make new friendships.” The second day of the championship saw battle commence under professional stage conditions. During the competition all shots were timed and carried out from a distance of 20 metres. The scores were finally added up and ranked, with Morgan coming out on top. The SAC(T) added: “I was really proud to have won, and really look forward to coming back next year to try to take top prize again.” ■ To get involved in RAF Archery contact: archery.membership@ rafsportsfederation.uk for more information.