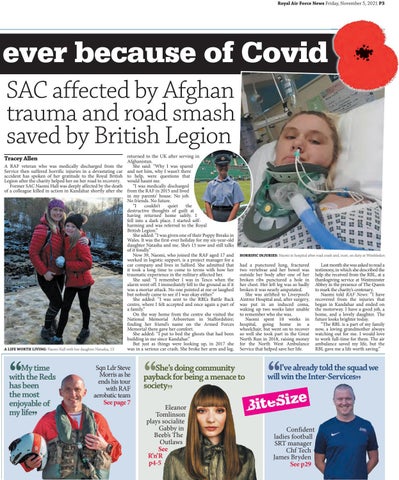 ever because of Covid SAC affected by Afghan trauma and road smash saved by British Legion Tracey Allen A RAF veteran who was medically discharged from the Service then suffered horrific injuries in a devastating car accident has spoken of her gratitude to the Royal British Legion after the charity helped her on her road to recovery. Former SAC Naomi Hall was deeply affected by the death of a colleague killed in action in Kandahar shortly after she

A LIFE WORTH LIVING: Naomi Hall with her daughter Natasha, 13

returned to the UK after serving in Afghanistan. She said: “Why I was spared and not him, why I wasn’t there to help, were questions that would haunt me. “I was medically discharged from the RAF in 2015 and lived in my parents’ house. No job. No friends. No future. “I couldn’t quiet the destructive thoughts of guilt at having returned home safely. I fell into a dark place. I started selfharming and was referred to the Royal British Legion.” She added: “I was given one of their Poppy Breaks in Wales. It was the first-ever holiday for my six-year-old daughter Natasha and me. She’s 13 now and still talks of it fondly.” Now 39, Naomi, who joined the RAF aged 17 and worked in logistic support, is a project manager for a car company and lives in Salford. She admitted that it took a long time to come to terms with how her traumatic experience in the military affected her. She said: “I remember I was in Tesco when the alarm went off. I immediately fell to the ground as if it was a mortar attack. No one pointed at me or laughed but nobody came to see if I was okay either.” She added: “I was sent to the RBL’s Battle Back centre, where I felt accepted and once again a part of a family.” On the way home from the centre she visited the National Memorial Arboretum in Staffordshire; finding her friend’s name on the Armed Forces Memorial there gave her comfort. She added: “I put to bed the ghosts that had been building in me since Kandahar.” But just as things were looking up, in 2017 she was in a serious car crash. She broke her arm and leg,

HORRIFIC INJURIES: Naomi in hospital after road crash and, inset, on duty at Wimbledon

had a punctured lung, fractured two vertebrae and her bowel was outside her body after one of her broken ribs punctured a hole in her chest. Her left leg was so badly broken it was nearly amputated. She was airlifted to Liverpool’s Aintree Hospital and, after surgery, was put in an induced coma, waking up two weeks later unable to remember who she was. Naomi spent 10 weeks in hospital, going home in a wheelchair, but went on to recover so well she took part in the Great North Run in 2018, raising money for the North West Ambulance Service that helped save her life.

Last month she was asked to read a testimony, in which she described the help she received from the RBL, at a thanksgiving service at Westminster Abbey in the presence of The Queen to mark the charity’s centenary. Naomi told RAF News: “I have recovered from the injuries that began in Kandahar and ended on the motorway. I have a good job, a home, and a lovely daughter. The future looks brighter today. “The RBL is a part of my family now, a loving grandmother always watching out for me. I would love to work full-time for them. The air ambulance saved my life, but the RBL gave me a life worth saving.”