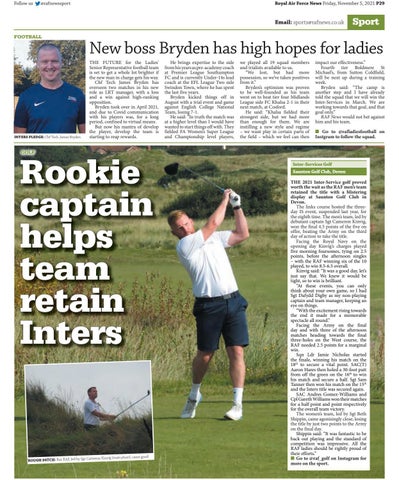 New boss Bryden has high hopes for ladies THE FUTURE for the Ladies&#39; Senior Representative football team is set to get a whole lot brighter if the new man in charge gets his way. Chf Tech James Bryden has overseen two matches in his new role as LRT manager, with a loss and a win against high-ranking opposition. Bryden took over in April 2021, and due to Covid communication with his players was, for a long period, confined to virtual means. But now his mantra of develop the player, develop the team is starting to reap rewards.

He brings expertise to the side from his years as pre-academy coach at Premier League Southampton FC and is currently Under-14s lead coach at the EFL League Two side Swindon Town, where he has spent the last five years. Bryden kicked things off in August with a trial event and game against English College National Team, losing 7-1. He said: “In truth the match was at a higher level than I would have wanted to start things off with. They fielded FA Women’s Super League and Championship level players,

we played all 19 squad members and trialists available to us. “We lost, but had more possession, so we’ve taken positives from it.” Bryden’s optimism was proven to be well-founded as his team went on to beat tier four Midlands League side FC Khalsa 2-1 in their next match, at Cosford. He said: “Khalsa fielded their strongest side, but we had more than enough for them. We are instilling a new style and regime – we want play in certain parts of the field – which we feel can then

impact our effectiveness.” Fourth tier Boldmere St Michael’s, from Sutton Coldfield, will be next up during a training week. Bryden said: “The camp is another step and I have already told the squad that we will win the Inter-Services in March. We are working towards that goal, and that goal only.” RAF News would not bet against him and his team. ■ Go to @rafladiesfootball on Instgram to follow the squad.

Inter-Services Golf Saunton Golf Club, Devon THE 2021 Inter-Service golf proved worth the wait as the RAF men’s team retained the title with a blistering display at Saunton Golf Club in Devon. The links course hosted the threeday IS event, suspended last year, for the eighth time. The men’s team, led by debutant captain Sgt Cameron Kinvig, won the final 4.5 points of the five on offer, beating the Army on the third day of action to take the title. Facing the Royal Navy on the opening day Kinvig’s charges played five morning foursomes, tying on 2.5 points, before the afternoon singles – with the RAF winning six of the 10 played, to win 8.5-6.5 overall. Kinvig said: “It was a good day, let’s just say that. We knew it would be tight, so to win is brilliant. “At these events, you can only think about your own game, so I had Sgt Dafydd Digby as my non-playing captain and team manager, keeping an eye on things. “With the excitement rising towards the end it made for a memorable spectacle all round.” Facing the Army on the final day and with three of the afternoon matches heading towards the final three-holes on the West course, the RAF needed 2.5 points for a marginal win. Sqn Ldr Jamie Nicholas started the finale, winning his match on the 18th to secure a vital point. SAC(T) Aaron Hares then holed a 30-foot putt from off the green on the 16th to win his match and secure a half. Sgt Sam Tanner then won his match on the 15th and the Inters title was secured again. SAC Andres Gomez-Williams and Cpl Gareth Williams won their matches for a half point and point respectively for the overall team victory. The women’s team, led by Sgt Beth Shippin, came agonisingly close, losing the title by just two points to the Army on the final day. Shippin said: “It was fantastic to be back out playing and the standard of competition was impressive. All the RAF ladies should be rightly proud of their efforts.” ■ Go to @raf_golf on Instagram for more on the sport.