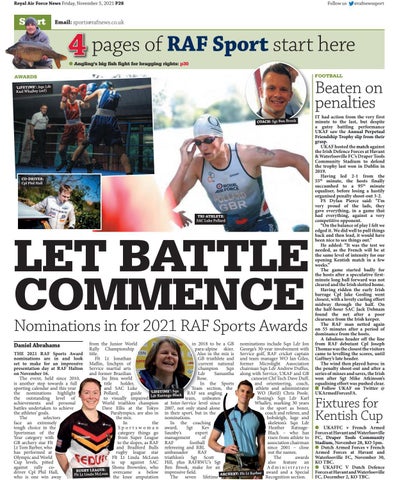 from the Junior World in 2018 to be a GB nominations include Sqn Ldr Jon Rally Championship para-alpine skier. George’s 30-year involvement with THE 2021 RAF Sports Award title. Also in the mix is Service golf, RAF cricket captain nominations are in and look Flt Lt Jonathan GB triathlete and and team manager WO Ian Giles, set to make for an impressive Maflin, linchpin of current national former Microlight Association presentation day at RAF Halton Service martial arts champion Sqn chairman Sqn Ldr Andrew Duffus, on November 16. and former Brazilian Ldr Samantha along with Service, UKAF and GB The event, held since 2010, Jiu Jitsu world Rose. canoeist Chf Tech Dave Duff, is another step towards a full title holder, In the Sports and orienteering, coach, sporting calendar and this year and SAC Luke Team section, the athlete and administrator Sqn E&#39;: &#39;LIFETIM the nominations highlight Pollard, guide RAF sea angling WO (Ret’d) Chris Poole. Black ageLdr Ratn the outstanding level of to visually impaired team, unbeaten Boxing’s Sqn Ldr Karl achievements and personal World triathlon champion at Inter-Service level since Whalley, marking 30 years battles undertaken to achieve Dave Ellis at the Tokyo 2007, not only stand alone in the sport as boxer, the athletes’ goals. Paralympics, are also in in their sport, but in the coach and referee, and The selectors the mix. nominations. bobsleigh, luge and face an extremely In the In the coaching skeleton’s Sqn Ldr tough choice in the S p o r t s w o m a n award, Sgt Kev Heather RatnageSportsman of the category things go Saunby’s expert Black – who has Year category with from Super League management of risen from athlete to GB archery star Flt to the slopes, as RAF RAF football association chairman Lt Tom Barber, who and Bradford Bulls refereeing and RBL since 2001 – close has performed at rugby league star ambassador RAF out the names. Olympic and World Flt Lt Linda McLean triathlon’s Sgt Scott The awards Cup levels, pitted is up against SAC Hill, plus RAFRWU’s Sgt also feature an against rally coShona Brownlee, who Ben Brook, make for an Administrators RUGBY LEAGUE: driver Cpl Phil Hall, overcame a below impressive field. award and a Special er Barb Lt Flt ean Y: McL HER a ARC Flt Lt Lind who is one win away the knee amputation The seven lifetime Recognition section.

IT had action from the very first minute to the last, but despite a gutsy battling performance UKAF saw the Annual Perpetual Friendship Trophy slip from their grasp. UKAF hosted the match against the Irish Defence Forces at Havant &amp; Waterlooville FC’s Draper Tools Community Stadium to defend the trophy last won in Dublin in 2019. Having led 2-1 from the 55th minute, the hosts finally succumbed to a 95th minute equaliser, before losing a hastily organised penalty shoot-out 3-2. FS Dyfan Pierce said: “I’m very proud of the lads, they gave everything, in a game that had everything, against a very competitive opponent. “On the balance of play I felt we edged it. We did well to pull things back and then lead, it would have been nice to see things out.” He added: “It was the test we needed, as the French will be at the same level of intensity for our opening Kentish match in a few weeks.” The game started badly for the hosts after a speculative firstminute long ball forward was not cleared and the Irish slotted home. Having ridden the early Irish barrage Cpl Jake Gosling went closest, with a lovely curling effort midway through the half. On the half-hour SAC Jack Debnam found the net after a poor clearance from the Irish keeper. The RAF man netted again on 55 minutes after a period of dominance from the hosts. A fabulous header off the line from RAF debutant Cpl Joseph Thomas was the closest the visitors came to levelling the scores, until Gaffney’s late header. The wind then played havoc in the penalty shoot-out and after a series of misses and saves, the Irish won after Sgt Mike Atkinson’s equalising effort was pushed clear. ■ Follow UKAF on Twitter @ UKArmedForcesFA.