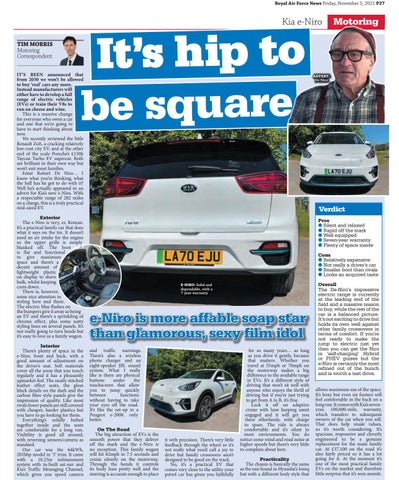 It’s hip to be square

IT’S BEEN announced that from 2030 we won’t be allowed to buy ‘real’ cars any more. Instead manufacturers will either have to develop a full range of electric vehicles (EVs) or train their V8s to run on cheese and wine. This is a massive change for everyone who owns a car and one that we’re going to have to start thinking about now. We recently reviewed the little Renault ZoE, a cracking relatively low-cost city EV, and at the other end of the scale Porsche’s £130k Taycan Turbo EV supercar. Both are brilliant in their own way but won’t suit most families. Enter Robert De Niro… I know what you’re thinking, what the hell has he got to do with it? Well he’s actually appeared in an advert for Kia’s new e-Niro. With a respectable range of 282 miles on a charge, this is a truly practical mid-sized EV. Exterior The e-Niro is very, er, Korean. It’s a practical family car that does what it says on the tin. It doesn’t need an air intake for the engine so the upper grille is simply blanked off. The boot is flat and functional to give maximum space and there’s a decent amount of lightweight plastic on display to shave bulk, whilst keeping costs down. There is, however, some nice attention to styling here and there. The electric blue flashes on the bumpers give it away as being an EV and there’s a sprinkling of chrome effect, plus some natty styling lines on several panels. It’s not really going to turn heads but it’s easy to love as a family wagon. Interior There’s plenty of space in the e-Niro, front and back, with a good amount of adjustment on the driver’s seat. Soft materials cover all the areas that you touch regularly and it has a pleasantly upmarket feel. The neatly stitched leather effect seats, the gloss black details on the dash and the carbon fibre style panels give the impression of quality. Like most rivals lower panels are still covered with cheaper, harder plastics but you have to go looking for them. Everything’s solidly bolted together inside and the seats are comfortable for a long run. Visibility is good all around, with reversing sensors/camera as standard. Our car was the 64kWh, 201bhp model in ‘3’ trim. It came with a 10.25in infotainment system with in-built sat-nav and Kia’s Traffic Messaging Channel, which gives you speed camera

e-Niro is more affable soap star than glamorous, sexy film idol and traffic warnings. There’s also a wireless phone charger and an eight-speaker JBL sound system. What I really like is there are physical buttons under the touchscreen that allow you to jump quickly between functions without having to take your eyes off the road. It’s like the set-up in a Peugeot e-2008, only better. On The Road The big attraction of EVs is the smooth power that they deliver off the mark and the e-Niro is no exception. This family wagon will hit 62mph in 7.5 seconds and cruise silently on the motorway. Through the bends it controls its body lean pretty well and the steering is accurate enough to place

it with precision. There’s very little feedback through the wheel so it’s not really what you’d call a joy to drive but family crossovers aren’t designed to be good on the track. No, it’s a practical EV that comes very close to the utility your petrol car has given you faithfully

for so many years… as long as you drive it gently, because that matters. Whether you travel at 55mph or 70mph on the motorway makes a big difference to the available range in EVs. It’s a different style of driving that won’t sit well with anyone who enjoys the thrill of driving but if you’re just trying to get from A to B, it’s fine. Lock it off on adaptive cruise with lane keeping assist engaged and it will get you there effortlessly, with charge to spare. The ride is always comfortable and it’s silent in most environments. You do notice some wind and road noise at higher speeds but there’s very little to complain about here. Practicality The chassis is basically the same as the one found in Hyundai’s Ioniq but with a different body style that

Overall The De-Niro’s impressive electric range is currently at the leading end of the field and a massive reason to buy, while the rest of the car is a balanced picture. It’s not exciting to drive but holds its own well against other family crossovers in terms of comfort. If you’re not ready to make the jump to electric just yet then you can get the Niro in ‘self-charging’ Hybrid or PHEV guises but the e-Niro is certainly the most refined out of the bunch and is worth a test drive. allows maximum use of the space. It’s boxy but even six footers will feel comfortable in the back on a long run. It comes with Kia’s sevenyear, 100,000-mile, warranty, which transfers to subsequent owners of the car when you sell. That does help resale values, so it’s worth considering. It’s spacious, responsive and cleverly engineered to be a genuine replacement for the main family car. At £37,100 on the road it’s also fairly priced so it has a lot going for it. At the moment it’s one of the most practical family EVs on the market and therefore little surprise that it’s won awards.