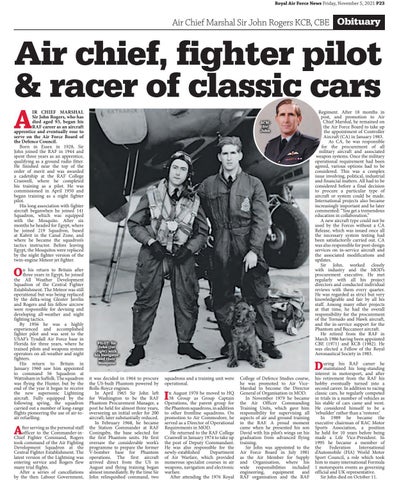 IR CHIEF MARSHAL Sir John Rogers, who has died aged 93, began his RAF career as an aircraft apprentice and eventually rose to serve on the Air Force Board of the Defence Council. Born in Essex in 1928, Sir John joined the RAF in 1944 and spent three years as an apprentice, qualifying as a ground radio fitter. He finished near the top of the order of merit and was awarded a cadetship at the RAF College Cranwell, where he completed his training as a pilot. He was commissioned in April 1950 and began training as a night fighter pilot. His long association with fighter aircraft beganwhen he joined 141 Squadron, which was equipped with the Mosquito. After six months he headed for Egypt, where he joined 219 Squadron, based at Kabrit in the Canal Zone, and where he became the squadron’s tactics instructor. Before leaving Egypt, the Mosquitos were replaced by the night fighter version of the twin-engine Meteor jet fighter.

n his return to Britain after three years in Egypt, he joined the All Weather Development Squadron of the Central Fighter Establishment. The Meteor was still operational but was being replaced by the delta-wing Gloster Javelin and Rogers and his fellow aircrew were responsible for devising and developing all-weather and night fighting tactics. By 1956 he was a highly experienced and accomplished fighter pilot and was sent to the USAF’s Tyndall Air Force base in Florida for three years, where he trained pilots and weapons system operators on all-weather and night fighters. His return to Britain in January 1960 saw him appointed to command 56 Squadron at Wattisham in Suffolk. The squadron was flying the Hunter, but by the end of the year it began to receive the new supersonic Lightning aircraft. Fully equipped by the following spring, the squadron carried out a number of long-range flights pioneering the use of air-toair refuelling.

fter serving as the personal staff officer to the Commander-inChief Fighter Command, Rogers took command of the Air Fighting Development Squadron at the Central Fighter Establishment. The latest version of the Lightning was entering service and Rogers flew many trial flights. After a series of cancellations by the then Labour Government,

PILOT: Sir John (far right) with his Navigator and their Mosquito

it was decided in 1964 to procure the US-built Phantom powered by Rolls-Royce engines. In April 1965 Sir John left for Washington to be the RAF Phantom Procurement Manager, a post he held for almost three years, overseeing an initial order for 200 aircraft; later substantially reduced. In February 1968, he became the Station Commander at RAF Coningsby, the base selected for the first Phantom units. He first oversaw the considerable work’s programme to prepare the former V-bomber base for Phantom operations. The first aircraft arrived direct from the US in August and flying training began almost immediately. By the time Sir John relinquished command, two

Regiment. After 18 months in post, and promotion to Air Chief Marshal, he remained on the Air Force Board to take up the appointment of Controller Aircraft (CA) in January 1983. As CA, he was responsible for the procurement of all military aircraft and associated weapon systems. Once the military operational requirement had been agreed, various options had to be considered. This was a complex issue involving, political, industrial and financial matters. All had to be considered before a final decision to procure a particular type of aircraft or system could be made. International projects also became increasingly important and he later commented: “You get a tremendous education in collaboration.” A new aircraft type could not be used by the Forces without a CA Release, which was issued once all the necessary system testing had been satisfactorily carried out. CA was also responsible for post-design services on in-service aircraft and the associated modifications and updates. Sir John, worked closely with industry and the MOD’s procurement executive. He met regularly with all his project directors and conducted individual reviews with them every quarter. He was regarded as strict but very knowledgeable and fair by all his staff. Among many other projects at that time, he had the overall responsibility for the procurement of the Tornado and Hawk aircraft, and the in-service support for the Phantom and Buccaneer aircraft. He retired from the RAF in March 1986 having been appointed CBE (1971) and KCB (1982). He was elected a Fellow of the Royal Aeronautical Society in 1983.

D squadrons and a training unit were operational.

n August 1970 he moved to HQ 38 Group as Group Captain Operations, the parent group for the Phantom squadrons, in addition to other frontline squadrons. On promotion to Air Commodore, he served as a Director of Operational Requirements in MOD. He returned to the RAF College Cranwell in January 1974 to take up the post of Deputy Commandant. He was also responsible for the newly-established Department of Air Warfare, which provided numerous specialist courses in air weapons, navigation and electronic warfare. After attending the 1976 Royal

College of Defence Studies course, he was promoted to Air ViceMarshal to become the Director General of Organisation in MOD. In November 1979 he became the Air Officer Commanding Training Units, which gave him responsibility for supervising all aspects of air and ground training in the RAF. A proud moment came when he presented his son David with his pilot’s wings on his graduation from advanced flying training. Sir John was appointed to the Air Force Board in July 1981 as the Air Member for Supply and Organisation, where his wide responsibilities included engineering, equipment and RAF organisation and the RAF

uring his RAF career he maintained his long-standing interest in motorsport, and after his retirement from the RAF his hobby eventually turned into a second career. In addition to racing classic cars, he regularly competed in trials in a number of vehicles as his stable of cars came and went. He considered himself to be a ‘rebuilder’ rather than a ‘restorer.’ In 1989 he became the executive chairman of RAC Motor Sports Association, a position he held for 10 years before being made a Life Vice-President. In 1995 he became a member of the Federation International d’Automobile (FIA) World Motor Sport Council, a role which took him to many international Formula 1 motorsports events as governing official and UK representative. Sir John died on October 11.