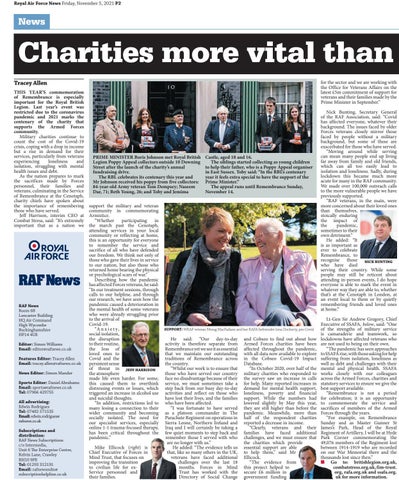 Charities more vital than for the sector and we are working with the Office for Veterans Affairs on the latest £5m commitment of support for veterans and their families made by the Prime Minister in September.”

Tracey Allen THIS YEAR’S commemoration of Remembrance is especially important for the Royal British Legion. Last year’s event was restricted due to the coronavirus pandemic and 2021 marks the centenary of the charity that supports the Armed Forces community. Military charities continue to count the cost of the Covid-19 crisis, coping with a drop in income but a rise in demand for their services, particularly from veterans experiencing loneliness and isolation, struggling with mental health issues and debt. As the nation prepares to mark the sacrifices made by Forces personnel, their families and veterans, culminating in the Service of Remembrance at the Cenotaph, charity chiefs have spoken about the importance of remembering those who have served. Jeff Harrison, interim CEO at Combat Stress, said: “It’s extremely important that as a nation we

PRIME MINISTER Boris Johnson met Royal British Legion Poppy Appeal collectors outside 10 Downing Street after the launch of the charity’s annual fundraising drive. The RBL celebrates its centenary this year and Mr Johnson received his poppy from five collectors: 84-year-old Army veteran Tom Dempsey; Naseem Dar, 71; Beth Young, 26; and Toby and Jemima support the military and veteran community in commemorating Armistice. “Whether participating in the march past the Cenotaph, attending services in your local community or reflecting at home, this is an opportunity for everyone to remember the service and sacrifice of all who have defended our freedom. We think not only of those who gave their lives in service to our nation, but also those who returned home bearing the physical or psychological scars of war.” Describing how the pandemic has affected Forces veterans, he said: “In our treatment sessions, through calls to our helpline, and through our research, we have seen how the pandemic caused a deterioration in the mental health of some veterans who were already struggling prior to the arrival of Covid-19. “A n x i e t y , social isolation, the disruption to their routine, the loss of loved ones to Covid and the persistent sense of threat in JEFF HARRISON the atmosphere made life even harder. For some, this caused them to overthink distressing events or losses, which triggered an increase in alcohol use and suicidal thoughts. “In addition, restrictions led to many losing a connection to their wider community and becoming socially isolated. The need for our specialist services, especially online 1-1 trauma-focused therapy, has been critical throughout the pandemic.” Mike Ellicock (right) is Chief Executive of Forces in Mind Trust, that focuses on improving the transition to civilian life for exService personnel and their families.

Castle, aged 18 and 16. The siblings started collecting as young children to help their father, who is a Poppy Appeal organiser in East Sussex. Toby said: “In the RBL’s centenary year it feels extra special to have the support of the Prime Minister.” The appeal runs until Remembrance Sunday, November 14.

He said: “Our day-to-day activity is therefore separate from Remembrance yet we see it as essential that we maintain our outstanding traditions of Remembrance across the country. “Whilst our work is to ensure that those who have served our country face no disadvantage because of their service, we must sometimes take a step back from our busy day-to-day activities and reflect on those who have lost their lives, and the families who have been affected. “I was fortunate to have served as a platoon commander in The Parachute Regiment on operations in Sierra Leone, Northern Ireland and Iraq and I will certainly be taking a few quiet moments to step back and remember those I served with who are no longer with us.” He added: “The evidence tells us that, like so many others in the UK, veterans have faced additional challenges over the last 18 months. Forces in Mind Trust has worked with the Directory of Social Change

and Cobseo to find out about how Armed Forces charities have been affected throughout the pandemic, with all data now available to explore in the Cobseo Covid-19 Impact Database. “In October 2020, over half of the military charities who responded to the survey saw an increase in calls for help. Many reported increases in demand for mental health support, loneliness, poverty and financial support. While the numbers had lowered slightly by May this year, they are still higher than before the pandemic. Meanwhile, more than half of the respondent charities reported a decrease in income. “Clearly, veterans and their families have faced additional challenges, and we must ensure that the charities which provide essential support are able to help them,” said Mr Ellicock. “The evidence from this project helped to secure £6 million in government funding

Nick Bunting, Secretary General of the RAF Association, said: “Covid has affected everyone, whatever their background. The issues faced by older Forces veterans closely mirror those faced by people without a military background, but some of these are exacerbated for those who have served. “Moving around while serving can mean many people end up living far away from family and old friends, which can all too easily lead to isolation and loneliness. Sadly, during lockdown this became much more acute for many in the RAF community. We made over 100,000 outreach calls to the more vulnerable people we have previously supported. “RAF veterans, in the main, were more concerned about their loved ones than themselves, stoically enduring the impact of the pandemic, sometimes to their own detriment.” He added: “It is as important as ever to celebrate Remembrance, to recognise those NICK BUNTING who have died serving their country. While some people may still be reticent about attending in-person events, I do hope everyone is able to mark the event in whatever way they are able to; whether that’s at the Cenotaph in London, at an event local to them or by quietly remembering friends and loved ones at home.” Lt-Gen Sir Andrew Gregory, Chief Executive of SSAFA, below, said: “One of the strengths of military service is camaraderie and teamwork, so lockdowns have affected veterans who are not used to being on their own. “The pandemic has seen approaches to SSAFA rise, with those asking for help suffering from isolation, loneliness as well as debt and challenges with their mental and physical health. SSAFA works closely with our colleagues across the Armed Forces, charities and statutory services to ensure we give the best support available. “Remembrance is not a period for celebration; it is an opportunity to commemorate the service and sacrifices of members of the Armed Forces through the years. “For example, on Remembrance Sunday and as Master Gunner St James’s Park, Head of the Royal Regiment of Artillery, I will be at Hyde Park Corner commemorating the 49,076 members of the Regiment lost between 1914-1919 who are recorded on our War Memorial there and the thousands lost since then.” ■ Go to: britishlegion.org.uk, combatstress.org.uk, fim-trust. org, rafa.org.uk and ssafa.org. uk for more information.