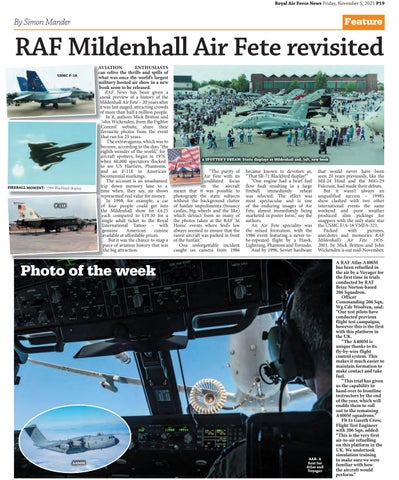 AVIATION ENTHUSIASTS can relive the thrills and spills of what was once the world’s largest military-hosted air show in a new book soon to be released. RAF News has been given a sneak preview of a history of the Mildenhall Air Fete – 20 years after it was last staged, attracting crowds of more than half a million people. In it, authors Mick Britton and John Wickenden, from the Fighter Control website, share their favourite photos from the event that ran for 25 years. The extravaganza, which was to become, according to the duo, “the eighth wonder of the world,” for aircraft spotters, began in 1976 when 60,000 spectators flocked to see US Harriers, Phantoms, and an F-11E in American bicentennial markings. The account is an unashamed trip down memory lane to a time when, they say, air shows represented real value for money. In 1998, for example, a car of four people could get into the Mildenhall show for £4.25 each compared to £19.50 for a single adult ticket to the Royal International Tattoo – with genuine American cuisine available at affordable prices. But it was the chance to snap a piece of aviation history that was the big attraction.

“The purity of Air Fete with its undiluted focus on the aircraft meant that it was possible to photograph the static subjects without the background clutter of funfair impedimenta (bouncy castles, big wheels and the like) which detract from so many of the photos taken at the RAF ‘At Home’ events where Sod’s law always seemed to ensure that the rarest aircraft was parked in front of the funfair.” One unforgettable incident caught on camera from 1986

became known to devotees as, “That SR-71 Blackbird display!” “One engine had a brief fuel flow fault resulting in a large fireball immediately reheat was selected. The effect was most spectacular and is one of the enduring images of Air Fete, almost immediately being marketed in poster form,” say the authors. An Air Fete speciality was the mixed formation, with the 1986 event featuring a never-tobe-repeated flight by a Hawk, Lightning, Phantom and Tornado. And by 1996, Soviet hardware

that would never have been seen 20 years previously, like the Mil-24 Hind and the MiG-29 Fulcrum, had made their debuts. But it wasn’t always an unqualified success – 1998’s show clashed with two other international events the same weekend and poor weather produced slim pickings for snappers with the only static star the USMC F/A-18 VMFA-321. Packed with pictures, anecdotes and memories RAF Mildenhall’s Air Fete 19762001, by Mick Britton and John Wickenden is out mid-November.

Photo of the week

AAR: A first for Atlas and Voyager

A RAF Atlas A400M has been refuelled in the air by a Voyager for the first time in trials conducted by RAF Brize Norton-based 206 Squadron. Officer Commanding 206 Sqn, Wg Cdr Woolven, said: “Our test pilots have conducted previous flight test campaigns, however this is the first with this platform in the UK. “The A400M is unique thanks to its fly-by-wire flight control system. This makes it much easier to maintain formation to make contact and take fuel. “This trial has given us the capability to hand over to frontline instructors by the end of the year, which will enable them to roll out to the remaining A400M squadrons.” Flt Lt Gareth Crow, Flight Test Engineer with 206 Sqn, added: “This is the very first air-to-air refuelling on this platform in the UK. We undertook simulation training to make sure we were familiar with how the aircraft would perform.”