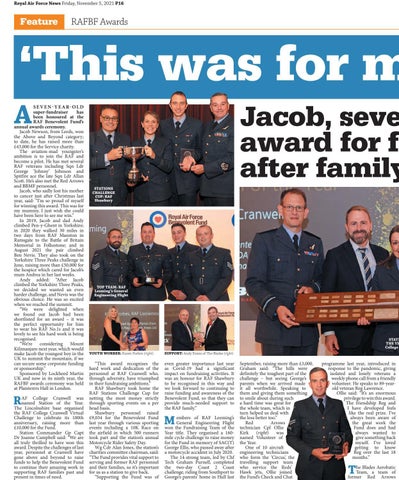 ‘This was for m A

S E V E N - Y E A R- O L D super-fundraiser has been honoured at the RAF Benevolent Fund’s annual awards ceremony. Jacob Newson, from Leeds, won the Above and Beyond category; to date, he has raised more than £43,000 for the Service charity. The aviation-mad youngster’s ambition is to join the RAF and become a pilot. He has met several RAF veterans including Sqn Ldr George ‘Johnny’ Johnson and Spitfire ace the late Sqn Ldr Allan Scott. He’s also met the Red Arrows and BBMF personnel. Jacob, who sadly lost his mother to cancer just after Christmas last year, said: “I’m so proud of myself for winning this award. This was for my mummy, I just wish she could have been here to see me win.” In 2019, Jacob and dad Andy climbed Pen-y-Ghent in Yorkshire; in 2020 they walked 30 miles in two days from RAF Manston in Ramsgate to the Battle of Britain Memorial in Folkestone; and in August 2021 the pair climbed Ben Nevis. They also took on the Yorkshire Three Peaks challenge in June, raising more than £50,000 for the hospice which cared for Jacob’s mum Andrea in her last weeks. Andy added: “After Jacob climbed the Yorkshire Three Peaks, we decided we wanted an even harder challenge, and Nevis was the obvious choice. He was so excited when we reached the summit. “We were delighted when we found out Jacob had been shortlisted for an award – it was the perfect opportunity for him to wear his RAF No.1s and it was lovely to see his hard work is being recognised. “We’re considering Mount Kilimanjaro next year, which would make Jacob the youngest boy in the UK to summit the mountain, if we can secure some corporate funding or sponsorship.” Sponsored by Lockheed Martin UK and now in its ninth year, the RAFBF awards ceremony was held at Plaisterers Hall in London.

AF College Cranwell was named Station of the Year. The Lincolnshire base organised the RAF College Cranwell Virtual Challenge to celebrate its 100th anniversary, raising more than £10,000 for the Fund. Station Commander Gp Capt Dr Joanne Campbell said: “We are all truly thrilled to have won this award. Despite the challenges of last year, personnel at Cranwell have gone above and beyond to raise funds to help the Benevolent Fund to continue their amazing work in supporting RAF families past and present in times of need.

“This award recognises the hard work and dedication of the personnel at RAF Cranwell who, through adversity, have triumphed in their fundraising ambitions.” RAF Shawbury took home the RAF Stations Challenge Cup for netting the most money strictly through sporting events on a per head basis. Shawbury personnel raised £9,034 for the Benevolent Fund last year through various sporting events including a 10K Race on the airfield in which 500 runners took part and the station’s annual Motorcycle Rider Safety Day. Wg Cdr Alan Jones, the station’s charities committee chairman, said: “The Fund provides vital support to serving and former RAF personnel and their families, so it’s important for us as a station to give back. “Supporting the Fund was of

even greater importance last year as Covid-19 had a significant impact on fundraising activities. It was an honour for RAF Shawbury to be recognised in this way and we look forward to continuing to raise funding and awareness of the Benevolent Fund, so that they can provide much-needed support to the RAF family.”

embers of RAF Leeming’s General Engineering Flight won the Fundraising Team of the Year title. They organised a 160mile cycle challenge to raise money for the Fund in memory of SAC(T) George Ellis, who passed away after a motorcycle accident in July 2020. The 14-strong team, led by Chf Tech Graham Purnell, completed the two-day Coast 2 Coast challenge, riding from Southport to George’s parents’ home in Hull last

September, raising more than £3,000. Graham said: “The hills were definitely the toughest part of the challenge – but seeing George’s parents when we arrived made it all worthwhile. Speaking to them and giving them something to smile about during such a hard time was great for the whole team, which in turn helped us deal with the loss better too.” Red Arrows technician Cpl Ollie Kirk (right) was named Volunteer of the Year. One of 10 aircraft engineering technicians who form the ‘Circus’, the travelling support team who service the Reds’ Hawk jets, Ollie joined the Fund’s Check and Chat

programme last year, introduced in response to the pandemic, giving isolated and lonely veterans a weekly phone call from a friendly volunteer. He speaks to 89-yearold veteran Reg Lawrence. Ollie said: “It’s an enormous privilege to win this award. The friendship Reg and I have developed feels like the real prize. I’ve always been aware of the great work the Fund does and had always wanted to give something back myself. I’ve loved getting to know Reg over the last 18 months.”

he Blades Aerobatic Team, a team of former Red Arrows