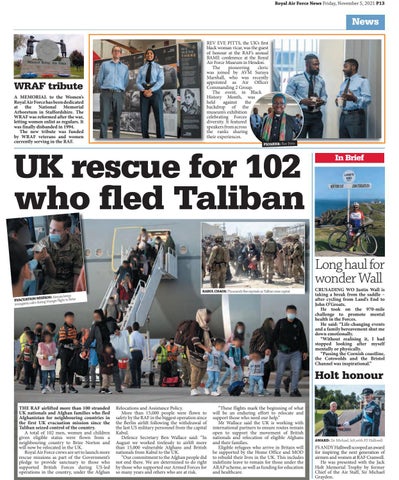 WRAF tribute A MEMORIAL to the Women’s Royal Air Force has been dedicated at the National Memorial Arboretum in Staffordshire. The WRAF was reformed after the war, letting women enlist as regulars. It was finally disbanded in 1994. The new tribute was funded by WRAF veterans and women currently serving in the RAF.

REV EVE PITTS, the UK’s first black woman vicar, was the guest of honour at the RAF’s annual BAME conference at the Royal Air Force Museum in Hendon. The pioneering cleric was joined by AVM Suraya Marshall, who was recently appointed as Air Officer Commanding 2 Group. The event, in Black History Month, was held against the backdrop of the museum’s exhibition celebrating Forces diversity. It featured speakers from across the ranks sharing their experiences. PIONEER: Rev Pitts

UK rescue for 102 who fled Taliban

CRUSADING WO Justin Wall is taking a break from the saddle – after cycling from Land’s End to John O’Groats. He took on the 970-mile challenge to promote mental health in the Forces. He said: “Life-changing events and a family bereavement shut me down emotionally. “Without realising it, I had stopped looking after myself mentally or physically. “Passing the Cornish coastline, the Cotswolds and the Bristol Channel was inspirational.”

Holt honour THE RAF airlifted more than 100 stranded UK nationals and Afghan families who fled Afghanistan for neighbouring countries in the first UK evacuation mission since the Taliban seized control of the country. A total of 102 men, women and children given eligible status were flown from a neighbouring country to Brize Norton and will now be relocated in the UK. Royal Air Force crews are set to launch more rescue missions as part of the Government’s pledge to provide sanctuary to those who supported British Forces during US-led operations in the country, under the Afghan

Relocations and Assistance Policy. More than 15,000 people were flown to safety by the RAF in the biggest operation since the Berlin airlift following the withdrawal of the last US military personnel from the capital Kabul. Defence Secretary Ben Wallace said: “In August we worked tirelessly to airlift more than 15,000 vulnerable Afghans and British nationals from Kabul to the UK. “Our commitment to the Afghan people did not end there. We are determined to do right by those who supported our Armed Forces for so many years and others who are at risk.

“These flights mark the beginning of what will be an enduring effort to relocate and support those who need our help.” Mr Wallace said the UK is working with international partners to ensure routes remain open to support the movement of British nationals and relocation of eligible Afghans and their families. Eligible refugees who arrive in Britain will be supported by the Home Office and MOD to rebuild their lives in the UK. This includes indefinite leave to remain for those under the ARAP scheme, as well as funding for education and healthcare.

FS ANDY Halliwell scooped an award for inspiring the next generation of airmen and women at RAF Cranwell. He was presented with the Jack Holt Memorial Trophy by former Chief of the Air Staff, Sir Michael Graydon.