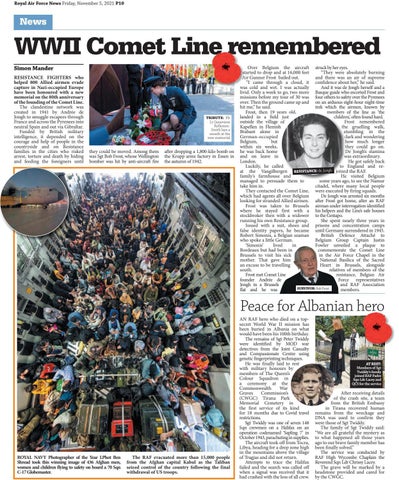 WWII Comet Line remembered Simon Mander RESISTANCE FIGHTERS who helped 800 Allied airmen evade capture in Nazi-occupied Europe have been honoured with a new memorial on the 80th anniversary of the founding of the Comet Line. The clandestine network was created in 1941 by Andrée de Jongh to smuggle escapees through France and across the Pyrenees into neutral Spain and out via Gibraltar. Funded by British military intelligence, it depended on the courage and help of people in the countryside and on Resistance families in the cities who risked arrest, torture and death by hiding and feeding the foreigners until

they could be moved. Among them was Sgt Bob Frost, whose Wellington bomber was hit by anti-aircraft fire

after dropping a 1,800-kilo bomb on the Krupp arms factory in Essen in the autumn of 1942.

Over Belgium the aircraft struck by her eyes. started to drop and at 16,000 feet “They were absolutely burning Air Gunner Frost bailed out. and there was an air of supreme “I came through a cloud, it confidence about her,” he said. was cold and wet. I was actually And it was de Jongh herself and a livid. Only a week to go, two more Basque guide who escorted Frost and missions before my tour of 30 was four others to safety over the Pyrenees over. Then the ground came up and on an arduous eight-hour night-time hit me,” he said. trek which the airmen, known by Frost, then 19 years old, members of the line as ‘the landed in a field just children,’ often found hard. outside the village of Frost remembered Kapellen in Flemish the gruelling walk, Brabant alone in stumbling in the German-occupied dark and wondering Belgium, but how much longer within six weeks, they could go on. he was back home De Jongh’s stamina and on leave in was extraordinary. London. He got safely back Luckily, he called to England and reat the Vangilbergen RESISTANCE: de Jongh joined the RAF. family’s farmhouse and He visited Belgium managed to persuade them to some years ago, to see the Namur take him in. citadel, where many local people They contacted the Comet Line, were executed by firing squads. which had agents all over Belgium De Jongh was arrested six months looking for stranded Allied airmen. after Frost got home, after an RAF Frost was taken to Brussels airman under interrogation identified where he stayed first with a his helpers and the Line’s safe houses stockbroker then with a widower to the Gestapo. running his own Resistance group. She spent nearly three years in Issued with a suit, shoes and prisons and concentration camps false identity papers, he became until Germany surrendered in 1945. Robert Simonis, a Belgian seaman British Defence Attaché to who spoke a little German. Belgium Group Captain Justin ‘Simonis’ lived in Fowler unveiled a plaque to Bordeaux but had been in commemorate the Comet Line Brussels to visit his sick in the Air Force Chapel in the mother. That gave him National Basilica of the Sacred an excuse to be travelling Heart in Brussels, alongside south. relatives of members of the Frost met Comet Line resistance, Belgian Air founder Andrée de Force representatives Jongh in a Brussels and RAF Association SURVIVOR: Bob Frost flat and he was members.

ROYAL NAVY Photographer of the Year LPhot Ben Shread took this winning image of 436 Afghan men, women and children flying to safety on board a 70 Sqn C-17 Globemaster.

The RAF evacuated more than 15,000 people from the Afghan capital Kabul as the Taliban seized control of the country following the final withdrawal of US troops.

AN RAF hero who died on a topsecret World War II mission has been buried in Albania on what would have been his 100th birthday. The remains of Sgt Peter Twiddy were identified by MOD war detectives from the Joint Casualty and Compassionate Centre using genetic fingerprinting techniques. He was finally laid to rest with military honours by members of The Queen’s Colour Squadron in a ceremony at the Commonwealth War Graves Commission’s (CWGC) Tirana Park Memorial Cemetery in the first service of its kind for 18 months due to Covid travel restrictions. Sgt Twiddy was one of seven 148 Sqn crewmen on a Halifax on an operation codenamed ‘Sapling 7’ in October 1943, parachuting in supplies. The aircraft took off from Tocra, Libya, heading for a drop zone high in the mountains above the village of Tragjas and did not return. Attempts to trace the Halifax failed and the search was called off when a signal was received that it had crashed with the loss of all crew.

After receiving details of the crash site, a team from the British Embassy in Tirana recovered human remains from the wreckage and DNA was used to confirm they were those of Sgt Twiddy. The family of Sgt Twiddy said: “We are all grateful the mystery as to what happened all those years ago to our brave family member has been finally solved.” The service was conducted by RAF High Wycombe Chaplain the Reverend Sqn Ldr Chrissy Lacey. The grave will be marked by a headstone provided and cared for by the CWGC.