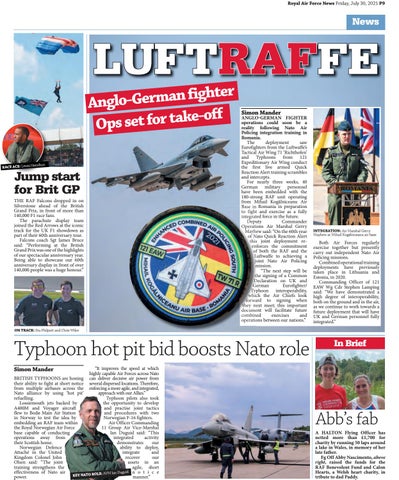 THE RAF Falcons dropped in on Silverstone ahead of the British Grand Prix, in front of more than 140,000 F1 race fans. The parachute display team joined the Red Arrows at the iconic track for the UK F1 showdown as part of their 60th anniversary tour. Falcons coach Sgt James Bruce said: “Performing at the British Grand Prix was one of the highlights of our spectacular anniversary year. Being able to showcase our 60th anniversary display in front of over 140,000 people was a huge honour.”

ANGLO-GERMAN FIGHTER operations could soon be a reality following Nato Air Policing integration training in Romania. The deployment saw Eurofighters from the Luftwaffe’s Tactical Air Wing 71 ‘Richthofen’ and Typhoons from 121 Expeditionary Air Wing conduct the first live armed Quick Reaction Alert training scrambles and intercepts. For nearly three weeks, 40 German military personnel have been embedded with the 180-strong RAF unit operating from Mihail Kogălniceanu Air Base in Romania in preparation to fight and exercise as a fully integrated force in the future. Deputy Commander Operations Air Marshal Gerry Mayhew said: “On the 60th year of Nato Quick Reaction Alert this joint deployment reenforces the commitment of both the RAF and the Luftwaffe to achieving a joint Nato Air Policing mission. “The next step will be the signing of a Common Declaration on UK and German Eurofighter/ Typhoon interoperability, which the Air Chiefs look forward to signing when they next meet; this important document will facilitate future combined exercises and operations between our nations.”

Both Air Forces regularly exercise together but presently carry out independent Nato Air Policing missions. Combined operational training deployments have previously taken place in Lithuania and Estonia, in 2020. Commanding Officer of 121 EAW Wg Cdr Stephen Lamping said: “We have demonstrated a high degree of interoperability, both on the ground and in the air, as we continue to work towards a future deployment that will have UK and German personnel fully integrated.”

A HALTON Flying Officer has netted more than £1,700 for charity by running 50 laps around a lake in Wales, in memory of her late father. Fg Off Abby Nascimento, above right, raised the funds for the RAF Benevolent Fund and Calon Hearts, a Welsh heart charity, in tribute to dad Paddy.