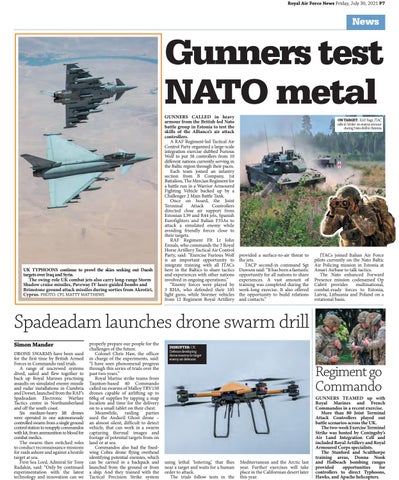 GUNNERS CALLED in heavy armour from the British-led Nato battle group in Estonia to test the skills of the Alliance’s air attack controllers. A RAF Regiment-led Tactical Air Control Party organised a large-scale integration exercise dubbed Furious Wolf to put 38 controllers from 10 different nations currently serving in the Baltic region through their paces. Each team joined an infantry section from B Company, 1st Battalion, The Mercian Regiment for a battle run in a Warrior Armoured Fighting Vehicle backed up by a Challenger 2 Main Battle Tank. Once on board, the Joint Terminal Attack Controllers directed close air support from Estonian L39 and R44 jets, Spanish Eurofighters and Italian F35As to attack a simulated enemy while avoiding friendly forces close to their targets. RAF Regiment Flt Lt John Ennals, who commands the 3 Royal Horse Artillery Tactical Air Control Party, said: “Exercise Furious Wolf is an important opportunity to integrate training with all JTACs here in the Baltics to share tactics and experiences with other nations involved in ongoing operations.” “Enemy forces were played by 3 RHA, who defended their 105 light guns, while Stormer vehicles from 12 Regiment Royal Artillery

ON TARGET: RAF Regt JTAC calls in ‘strike’ on enemy armour during Nato drill in Estonia

provided a surface-to-air threat to the jets. TACP second-in command Sgt Dawson said: “It has been a fantastic opportunity for all nations to share experiences. A vast amount of training was completed during the week-long exercise. It also offered the opportunity to build relations and contacts.”

Spadeadam launches drone swarm drill Simon Mander DRONE SWARMS have been used for the first time by British Armed Forces in Commando raid trials. A range of uncrewed systems dived, sailed and flew together to back up Royal Marines practising assaults on simulated enemy missile and radar installations in Cumbria and Dorset, launched from the RAF’s Spadeadam Electronic Warfare Tactics centre in Northumberland and off the south coast. Six medium-heavy lift drones were operated in one autonomously controlled swarm from a single ground control station to resupply commandos with kit, from ammunition to blood for combat medics. The swarm then switched roles to conduct reconnaissance missions for raids ashore and against a hostile target at sea. First Sea Lord, Admiral Sir Tony Radakin, said: “Only by continued experimentation with the latest technology and innovation can we

properly prepare our people for the challenges of the future. Colonel Chris Haw, the officer in charge of the experiments, said: “I have seen phenomenal progress through this series of trials over the past two years.” Royal Marine strike teams from Taunton-based 40 Commando called on swarms of Malloy TRV150 drones capable of airlifting up to 68kg of supplies by tapping a map location and time for the delivery on to a small tablet on their chest. Meanwhile, raiding parties used the Anduril Ghost drone – an almost silent, difficult to detect vehicle, that can work in a swarm capturing thermal images and footage of potential targets from on land or at sea. Commandos also had the fixedwing Cobra drone flying overhead identifying potential enemies, which can be carried in a backpack and launched from the ground or from a ship. And they trained with the Tactical Precision Strike system

using lethal ‘loitering,’ that flies near a target and waits for a human order to attack. The trials follow tests in the

Mediterranean and the Arctic last year. Further exercises will take place in the Californian desert later this year.