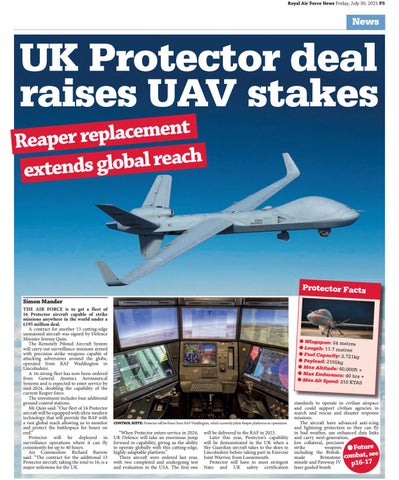 Protector Facts Simon Mander THE AIR FORCE is to get a fleet of 16 Protector aircraft capable of strike missions anywhere in the world under a £195 million deal. A contract for another 13 cutting-edge unmanned aircraft was signed by Defence Minister Jeremy Quin. The Remotely Piloted Aircraft System will carry out surveillance missions armed with precision strike weapons capable of attacking adversaries around the globe, operated from RAF Waddington in Lincolnshire. A 16-strong fleet has now been ordered from General Atomics Aeronautical Systems and is expected to enter service by mid-2024, doubling the capability of the current Reaper force. The investment includes four additional ground control stations. Mr Quin said: “Our fleet of 16 Protector aircraft will be equipped with ultra-modern technology that will provide the RAF with a vast global reach allowing us to monitor and protect the battlespace for hours on end.” Protector will be deployed in surveillance operations where it can fly consistently for up to 40 hours. Air Commodore Richard Barrow said: “The contract for the additional 13 Protector aircraft, taking the total to 16, is a major milestone for the UK.

CONTROL SUITE: Protector will be flown from RAF Waddington, which currently pilots Reaper platforms on operations

“When Protector enters service in 2024, UK Defence will take an enormous jump forward in capability, giving us the ability to operate globally with this cutting-edge, highly-adaptable platform.” Three aircraft were ordered last year, with two completed and undergoing test and evaluation in the USA. The first one

will be delivered to the RAF in 2023. Later this year, Protector’s capability will be demonstrated in the UK when a Sky Guardian aircraft takes to the skies in Lincolnshire before taking part in Exercise Joint Warrior, from Lossiemouth. Protector will have to meet stringent Nato and UK safety certification

standards to operate in civilian airspace and could support civilian agencies in search and rescue and disaster response missions. The aircraft have advanced anti-icing and lightning protection so they can fly in bad weather, use enhanced data links and carry next-generation, low collateral, precision strike weapons Future including the Britishsee made Brimstone combat, missile and Paveway IV p16-17 laser guided bomb.