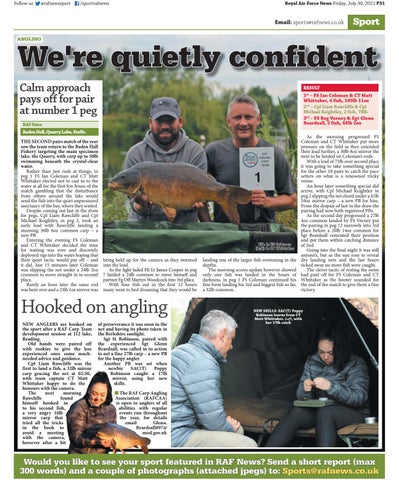 RAF Pairs Baden Hall, Quarry Lake, Staffs. THE SECOND pairs match of the year saw the team return to the Baden Hall Fishery targeting the main specimen lake, the Quarry, with carp up to 50lb swimming beneath the crystal-clear water. Rather than just rush at things, in peg 1 FS Ian Coleman and CT Matt Whittaker elected not to cast in to the water at all for the first few hours of the match gambling that the disturbance from others around the lake would send the fish into the quiet unpressured sanctuary of the bay, where they waited. Despite coming out last in the draw for pegs, Cpl Liam Rawcliffe and Cpl Michael Keightley, in peg 2, took an early lead with Rawcliffe landing a stunning 36lb 6oz common carp – a new PB. Entering the evening FS Coleman and CT Whittaker decided the time for waiting was over and discretely deployed rigs into the water hoping that their quiet tactic would pay off – and it did. Just 15 minutes later Coleman was slipping the net under a 24lb 2oz common to move straight in to second place. Barely an hour later the same rod was bent over and a 23lb 1oz mirror was

being held up for the camera as they stormed into the lead. As the light faded Flt Lt James Cooper in peg 7 landed a 24lb common to move himself and partner Fg Off Martyn Woodcock into 3rd place. With four fish out in the first 12 hours many went to bed dreaming that they would be

Hooked on angling NEW ANGLERS are hooked on the sport after a RAF Carp Team development session at J12 lake, Reading. Old hands were paired off with rookies to give the less experienced ones some muchneeded advice and guidance. Cpl Liam Rawcliffe was the first to land a fish, a 32lb mirror carp gracing the net at 02:30, with team captain CT Matt Whittaker happy to do the honours with the camera. The next morning Rawcliffe found himself hooked in to his second fish, a very angry 16lb mirror carp that tried all the tricks in the book to avoid a meeting with the camera, however after a bit

of perseverance it was soon in the net and having its photo taken in the Berkshire sunlight. Sgt Si Robinson, paired with the experienced Sgt Glenn Beardsall, was called in to action to net a fine 27lb carp – a new PB for the happy angler. Another PB was set when newbie SAC(T) Poppy Robinson caught a 17lb mirror, using her new skills.

landing one of the larger fish swimming in the depths. The morning scores update however showed only one fish was landed in the hours of darkness, in peg 1 FS Coleman continued his fine form landing his 3rd and biggest fish so far, a 32lb common.

As the morning progressed FS Coleman and CT Whittaker put more pressure on the field as they extended their lead further, a 30lb 8oz mirror the next to be landed on Coleman’s rods. With a lead of 73lb over second place it was going to take something special for the other 10 pairs to catch the pace setters on what is a renowned tricky venue. An hour later something special did arrive, with Cpl Michael Keightley in peg 2 slipping the net chord under a 41lb 10oz mirror carp – a new PB for him. From the despair of last in the draw the pairing had now both registered PBs. As the second day progressed a 27lb 4oz common landed by FS Verney put the pairing in peg 12 narrowly into 3rd place before a 20lb 14oz common for Sgt Beardsall cemented their position and put them within catching distance of 2nd. Going into the final night it was still anyone’s, but as the sun rose to reveal dry landing nets and the last hours ticked away no more fish were caught. The clever tactic of resting the swim had paid off for FS Coleman and CT Whittaker as the hooter sounded for the end of the match to give them a fine victory.

■ The RAF Carp Angling Association (RAFCAA) is open to anglers of all abilities with regular events run throughout the year, for details email Glenn. Beardsall897@ mod.gov.uk