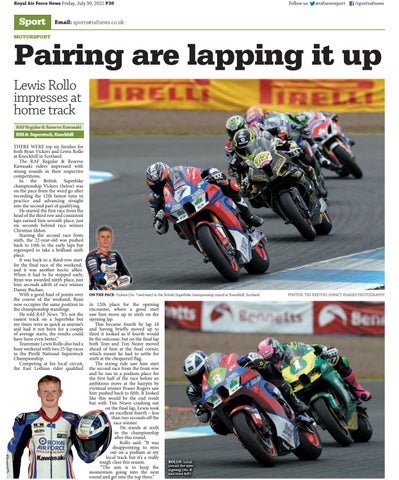 Pairing are lapping it up Lewis Rollo impresses at home track RAF Regular & Reserve Kawasaki BSB & Superstock, Knockhill THERE WERE top six finishes for both Ryan Vickers and Lewis Rollo at Knockhill in Scotland. The RAF Regular & Reserve Kawasaki riders impressed with strong rounds in their respective competitions. In the British Superbike championship Vickers (below) was on the pace from the word go after recording the 12th fastest time in practice and advancing straight into the second part of qualifying. He started the first race from the head of the third row and consistent laps earned him seventh place, just six seconds behind race winner Christian Iddon. Starting the second race from sixth, the 22-year-old was pushed back to 10th in the early laps but regrouped to take a brilliant sixth place. It was back to a third-row start for the final race of the weekend, and it was another hectic affair. When it had to be stopped early, Ryan was awarded ninth place, just four seconds adrift of race winner Danny Buchan. With a good haul of points over the course of the weekend, Ryan now occupies the same position in the championship standings. He told RAF News: “It’s not the easiest track on a Superbike but my times were as quick as anyone’s and had it not been for a couple of average starts, the results could have been even better.” Teammate Lewis Rollo also had a busy weekend with two 25-lap races in the Pirelli National Superstock Championship. Competing at his local circuit, the East Lothian rider qualified

ON THE PACE: Vickers (No. No. 7 and inset) in the British Superbike championship round at Knockhill, Scotland

in 12th place for the opening encounter, where a good start saw him move up to sixth on the opening lap. This became fourth by lap 10 and having briefly moved up to third it looked as if fourth would be the outcome, but on the final lap both Tom and Tim Neave moved ahead of him at the final corner, which meant he had to settle for sixth at the chequered flag. The strong ride saw him start the second race from the front row and he ran in a podium place for the first half of the race before an ambitious move at the hairpin by eventual winner Fraser Rogers saw him pushed back to fifth. It looked like this would be the end result but with Tim Neave crashing out on the final lap, Lewis took an excellent fourth – less than two seconds off the race winner. He stands at sixth in the championship after this round. Rollo said: “It was disappointing to miss out on a podium at my local track but it’s a really tough class this season. “The aim is to keep the momentum going into the next round and get into the top three.”

ROLLO: Local circuit for new signing (No. 8 and inset left)