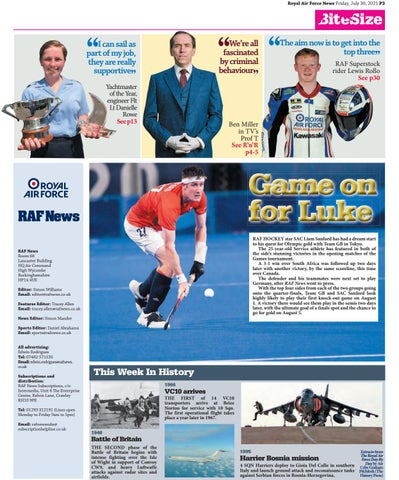 We’re all fascinated by criminal behaviour”

I can sail as part of my job, they are really supportive”

Game on for Luke RAF HOCKEY star SAC Liam Sanford has had a dream start to his quest for Olympic gold with Team GB in Tokyo. The 25-year-old Service athlete has featured in both of the side’s stunning victories in the opening matches of the Games tournament. A 3-1 win over South Africa was followed up two days later with another victory, by the same scoreline, this time over Canada. The defender and his teammates were next set to play Germany, after RAF News went to press. With the top four sides from each of the two groups going onto the quarter-finals, Team GB and SAC Sanford look highly likely to play their first knock-out game on August 1. A victory there would see them play in the semis two days later, with the ultimate goal of a finals spot and the chance to go for gold on August 5.

THE FIRST of 14 VC10 transporters arrive at Brize Norton for service with 10 Sqn. The first operational flight takes place a year later in 1967.

Battle of Britain THE SECOND phase of the Battle of Britain begins with intense fighting over the Isle of Wight in support of Convoy CW9, and heavy Luftwaffe attacks against radar sites and airfields.