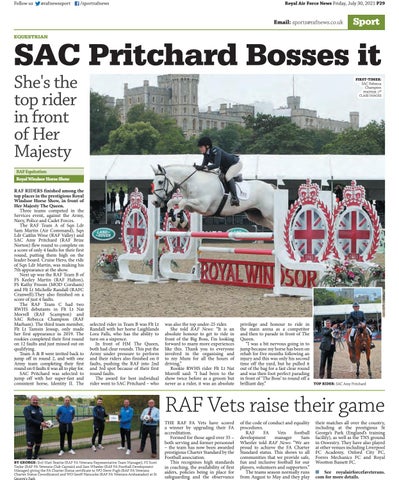 She's the top rider in front of Her Majesty

RAF Equitation Royal Windsor Horse Show RAF RIDERS finished among the top places in the prestigious Royal Windsor Horse Show, in front of Her Majesty The Queen. Three teams competed in the Services event, against the Army, Navy, Police and Cadet Forces. The RAF Team A of Sqn Ldr Sam Martin (Air Command), Sqn Ldr Caitlin Wroe (RAF Valley) and SAC Amy Pritchard (RAF Brize Norton) flew round to complete on a score of only 4 faults for their first round, putting them high on the leader board. Cruise Hero, the ride of Sqn Ldr Martin, was making his 7th appearance at the show. Next up was the RAF Team B of FS Keeley Martin (RAF Halton), FS Kathy Froom (MOD Corsham) and Flt Lt Michelle Randall (RAFC Cranwell).They also finished on a score of just 4 faults. The RAF Team C had two RWHS debutants in Flt Lt Nat Morrell (RAF Scampton) and SAC Rebecca Champion (RAF Marham). The third team member, Flt Lt Tamsin Jessup, only made her first appearance in 2019. The rookies completed their first round on 12 faults and just missed out on qualifying. Team A & B were invited back to jump off in round 2, and with one Army team completing their first round on 0 faults it was all to play for. SAC Pritchard was selected to jump off with her super-fast and consistent horse, Identity II. The

selected rider in Team B was Flt Lt Randall with her horse Laighlands Lora Falls, who has the ability to turn on a sixpence. In front of HM The Queen, both had clear rounds. This put the Army under pressure to perform and their riders also finished on 0 faults, pushing the RAF into 2nd and 3rd spot because of their first round faults. The award for best individual rider went to SAC Pritchard – who

was also the top under-25 rider. She told RAF News: “It is an absolute honour to get to ride in front of the Big Boss, I’m looking forward to many more experiences like this. Thank you to everyone involved in the organising and to my Mum for all the hours of driving.” Rookie RWHS rider Flt Lt Nat Morrell said: “I had been to the show twice before as a groom but never as a rider, it was an absolute

privilege and honour to ride in the main arena as a competitor and then to parade in front of The Queen. “I was a bit nervous going in to jump because my horse has been on rehab for five months following an injury and this was only his second time off the yard, but he pulled it out of the bag for a fast clear round and was then foot perfect parading in front of ‘The Boss’ to round off a brilliant day.”

THE RAF FA Vets have scored a winner by upgrading their FA accreditation. Formed for those aged over 35 – both serving and former personnel – the team has now been awarded prestigious Charter Standard by the Football association. This recognises high standards in coaching, the availability of first aiders, policies being in place for safeguarding and the observance

of the code of conduct and equality procedures. RAF FA Vets football development manager Sam Wheeler told RAF News: “We are proud to achieve the FA Charter Standard status. This shows to all communities that we provide safe, fun and inclusive football for our players, volunteers and supporters.” The teams season normally runs from August to May and they play

their matches all over the country, including at the prestigious St George’s Park (England’s training facility), as well as the TNS ground in Oswestry. They have also played at other venues including Liverpool FC Academy, Oxford City FC, Forres Mechanics FC and Royal Wootton Bassett FC. ■ See royalairforcefaveterans. com for more details.