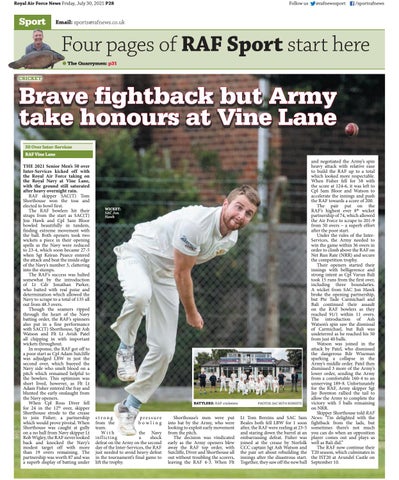 Brave fightback but Army take honours at Vine Lane 50 Over Inter-Services RAF Vine Lane THE 2021 Senior Men’s 50 over Inter-Services kicked off with the Royal Air Force taking on the Royal Navy at Vine Lane, with the ground still saturated after heavy overnight rain. RAF skipper SAC(T) Tom Shorthouse won the toss and elected to bowl first. The RAF bowlers hit their straps from the start as SAC(T) Jon Hawk and Cpl Sam Bloor bowled beautifully in tandem, finding extreme movement with the ball. Both openers took two wickets a piece in their opening spells as the Navy were reduced to 23-4, which soon became 27-5 when Sgt Keiran Pearce entered the attack and beat the inside edge of the Navy’s number 3, clattering into the stumps. The RAF’s success was halted somewhat by the introduction of Lt Cdr Jonathan Parker, who batted with real poise and determination which allowed the Navy to scrape to a total of 135 all out from 48.3 overs. Though the seamers ripped through the heart of the Navy batting order, the RAF’s spinners also put in a fine performance with SAC(T) Shorthouse, Sgt Ash Watson and Flt Lt Avish Patel all chipping in with important wickets throughout. In response, the RAF got off to a poor start as Cpl Adam Sutcliffe was adjudged LBW in just the second over, which buoyed the Navy side who smelt blood on a pitch which remained helpful to the bowlers. This optimism was short lived, however, as Flt Lt Adam Fisher entered the fray and blunted the early onslaught from the Navy openers. When Cpl Ross Diver fell for 24 in the 12th over, skipper Shorthouse strode to the crease to join Fisher; a partnership which would prove pivotal. When Shorthouse was caught at gully on a no ball from Navy skipper Lt Rob Wigley, the RAF never looked back and knocked the Navy’s modest target off with more than 19 overs remaining. The partnership was worth 87 and was a superb display of batting under

strong pressure from the bowling team. With the Navy inflicting a shock defeat on the Army on the second day of the Inter-Services, the RAF just needed to avoid heavy defeat in the tournament’s final game to lift the trophy.

Shorthouse’s men were put into bat by the Army, who were looking to exploit early movement from the pitch. The decision was vindicated early as the Army openers blew away the RAF top order, with Sutcliffe, Diver and Shorthouse all out without troubling the scorers, leaving the RAF 4-3. When Flt

Lt Tom Berzins and SAC Sam Beales both fell LBW for 1 soon after, the RAF were reeling at 23-5 and staring down the barrel at an embarrassing defeat. Fisher was joined at the crease by Norfolk CCC captain Sgt Ash Watson and the pair set about rebuilding the innings after the disastrous start. Together, they saw off the new ball

and negotiated the Army’s spin heavy attack with relative ease to build the RAF up to a total which looked more respectable. When Fisher fell for 58 with the score at 124-6, it was left to Cpl Sam Bloor and Watson to accelerate the innings and push the RAF towards a score of 200. The pair put on the RAF’s highest ever 8th wicket partnership of 74, which allowed the Air Force to scrape to 201-9 from 50 overs – a superb effort after the poor start. Under the rules of the InterServices, the Army needed to win the game within 36 overs in order to climb above the RAF on Net Run Rate (NRR) and secure the competition trophy. Their openers started their innings with belligerence and strong intent as Cpl Varun Bali took 15 runs from the first over, including three boundaries. A wicket from SAC Jon Hawk broke the opening partnership, but Pte Tade Carmichael and Bali continued their assault on the RAF bowlers as they reached 91/1 within 11 overs. The introduction of Ash Watson’s spin saw the dismissal of Carmichael, but Bali was undeterred as he reached his 50 from just 40 balls. Watson was joined in the attack by Patel, who dismissed the dangerous Bdr Wiseman sparking a collapse in the Army’s middle order. Patel then dismissed 3 more of the Army’s lower order, sending the Army from a comfortable 160-4 to an unnerving 189-8. Unfortunately for the RAF, Army skipper Sgt Jay Boynton rallied the tail to allow the Army to complete the victory with 5 balls remaining on NRR. Skipper Shorthouse told RAF News: “I’m delighted with the fightback from the lads, but sometimes there’s not much you can do when an opposition player comes out and plays as well as Bali did.” The RAF now continue their T20 season, which culminates in the IST20 at Arundel Castle on September 10.