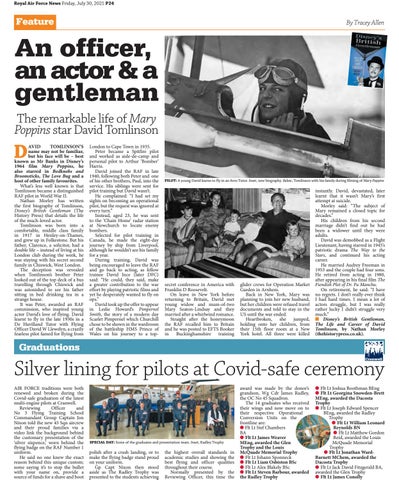 An officer, an actor & a gentleman The remarkable life of Mary Poppins star David Tomlinson

AVID TOMLINSON’S name may not be familiar, but his face will be – best known as Mr Banks in Disney’s 1964 film Mary Poppins, he also starred in Bedknobs and Broomsticks, The Love Bug and a host of other family favourites. What’s less well known is that Tomlinson became a distinguished RAF pilot in World War II. Nathan Morley has written the first biography of Tomlinson, Disney’s British Gentleman (The History Press) that details the life of the much-loved actor. Tomlinson was born into a comfortable, middle class family in 1917 in Henley-on-Thames, and grew up in Folkestone. But his father, Clarence, a solicitor, had a double life – instead of living at his London club during the week, he was staying with his secret second family in Chiswick, West London. The deception was revealed when Tomlinson’s brother Peter looked out of the top deck of a bus travelling through Chiswick and was astonished to see his father sitting in bed drinking tea in a strange house. It was Peter, awarded an RAF commission, who inspired young actor David’s love of flying. David learnt to fly in the late 1930s in a De Havilland Tutor with Flying Officer David W Llewelyn, a crazily fearless pilot famed for flying from

London to Cape Town in 1935. Peter became a Spitfire pilot and worked as aide-de-camp and personal pilot to Arthur ‘Bomber’ Harris. David joined the RAF in late 1940, following both Peter and one of his other brothers, Paul, into the service. His siblings were sent for pilot training but David wasn’t. He complained: “I had set my sights on becoming an operational pilot, but the request was ignored at every turn.” Instead, aged 23, he was sent to the ‘Chain Home’ radar station at Newchurch to locate enemy bombers. Selected for pilot training in Canada, he made the eight-day journey by ship from Liverpool, although he wouldn’t see his family for a year. During training, David was being encouraged to leave the RAF and go back to acting, as fellow trainee David Ince (later DFC) said: “He could, they said, make a greater contribution to the war effort by playing patriotic films and yet he desperately wanted to fly on ops.” David took up the offer to appear in Leslie Howard’s Pimpernel Smith, the story of a modern day Scarlet Pimpernel which Churchill chose to be shown in the wardroom of the battleship HMS Prince of Wales on his journey to a top-

PILOT: A young David learns to fly in an Avro Tutor. Inset, new biography. Below, Tomlinson with his family during filming of Mary Poppins

secret conference in America with Franklin D Roosevelt. On leave in New York before returning to Britain, David met young widow and mum-of-two Mary Seaton-Lindsay and they married after a whirlwind romance. Straight after the honeymoon the RAF recalled him to Britain and he was posted to EFTS Booker in Buckinghamshire training

glider crews for Operation Market Garden in Arnhem. Back in New York, Mary was planning to join her new husband, but her children were refused travel documents and told to stay in the US until the war ended. Heartbroken, she jumped, holding onto her children, from their 15th floor room at a New York hotel. All three were killed

instantly. David, devastated, later learnt that it wasn’t Mary’s first attempt at suicide. Morley said: “The subject of Mary remained a closed topic for decades.” His children from his second marriage didn’t find out he had been a widower until they were adults. David was demobbed as a Flight Lieutenant, having starred in 1945’s patriotic drama The Way to the Stars, and continued his acting career. He married Audrey Freeman in 1953 and the couple had four sons. He retired from acting in 1980, after appearing in his final film The Fiendish Plot of Dr. Fu Manchu. On retirement, he said: “I have no regrets. I don’t really ever think I had hard times. I mean a lot of actors struggle, but I was really rather lucky I didn’t struggle very much.” ■ Disney’s British Gentleman, The Life and Career of David Tomlinson, by Nathan Morley (thehistorypress.co.uk).

AIR FORCE traditions were both renewed and broken during the Covid-safe graduation of the latest multi-engine pilots at Cranwell. Reviewing Officer and No 3 Flying Training School Commandant Group Captain Jon Nixon told the new 45 Sqn aircrew and their proud families via a video link the background behind the customary presentation of the ‘silver sixpence,’ worn behind the flying badge on the RAF Number 1 uniform. He said no one knew the exact reason behind this unique custom; some saying it’s to stop the bullet with your name on, provide a source of funds for a shave and boot

SPECIAL DAY: Some of the graduates and presentation team. Inset, Radley Trophy

polish after a crash landing, or to make the flying badge stand proud on your uniform. Gp Capt Nixon then stood aside as The Radley Trophy was presented to the students achieving

the highest overall standards in academic studies and showing the best flying and officer qualities throughout their course. Normally presented by the Reviewing Officer, this time the