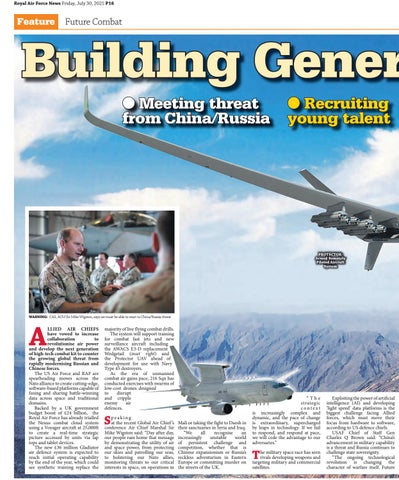 WARNING: CAS, ACM Sir Mike Wigston, says we must be able to react to China/Russia threat

LLIED AIR CHIEFS have vowed to increase collaboration to revolutionise air power and develop the next generation of high-tech combat kit to counter the growing global threat from rapidly modernising Russian and Chinese forces. The US Air Force and RAF are spearheading moves across the Nato alliance to create cutting-edge, software-based platforms capable of fusing and sharing battle-winning data across space and traditional domains. Backed by a UK government budget boost of £24 billion, the Royal Air Force has already trialled the Nexus combat cloud system using a Voyager aircraft at 25,000ft to create a real-time strategic picture accessed by units via lap tops and tablet devices. The new £36 million Gladiator air defence system is expected to reach initial operating capability by the end of the year, which could see synthetic training replace the

majority of live flying combat drills. The system will support training for combat fast jets and new surveillance aircraft including the AWACS E3-D replacement Wedgetail (inset right) and the Protector UAV ahead of development for use with Navy Type 45 destroyers. As the era of unmanned combat air gains pace, 216 Sqn has conducted exercises with swarms of low-cost drones designed to disrupt and cripple enemy air defences.

peaking at the recent Global Air Chief ’s conference Air Chief Marshal Sir Mike Wigston said: “Day after day, our people ram home that message by demonstrating the utility of air and space power, from protecting our skies and patrolling our seas, to bolstering our Nato allies, monitoring threats to our critical interests in space, on operations in

Mali or taking the fight to Daesh in their sanctuaries in Syria and Iraq. “We all recognise an increasingly unstable world of persistent challenge and competition, whether that is Chinese expansionism or Russia’s reckless adventurism in Eastern Europe or committing murder on the streets of the UK.

“The strategic context is increasingly complex and dynamic, and the pace of change is extraordinary, supercharged by leaps in technology. If we fail to respond, and respond at pace, we will cede the advantage to our adversaries.”

Exploiting the power of artificial intelligence (AI) and developing ‘light speed’ data platforms is the biggest challenge facing Allied forces, which must move their focus from hardware to software, according to US defence chiefs. USAF Chief of Staff Gen Charles Q Brown said: “China’s advancement in military capability is a threat and Russia continues to challenge state sovereignty. “The ongoing technological revolution is changing the character of warfare itself. Future