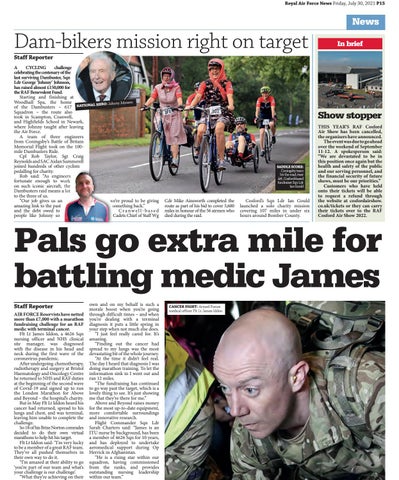 A CYCLING challenge celebrating the centenary of the last surviving Dambuster, Sqn Ldr George ‘Johnny’ Johnson, has raised almost £150,000 for the RAF Benevolent Fund. Starting and finishing at son Woodhall Spa, the home HERO: Johnny John of the Dambusters – 617 NATIONAL Squadron – the route also took in Scampton, Cranwell, and Highfields School in Newark, where Johnny taught after leaving the Air Force. A team of three engineers from Coningsby’s Battle of Britain Memorial Flight took on the 100mile Dambusters Ride. Cpl Rob Taylor, Sgt Craig Reynolds and SAC Aidan Summerell joined hundreds of other cyclists pedalling for charity. Rob said: “As engineers fortunate enough to work on such iconic aircraft, the Dambusters raid means a lot to the three of us. “Our job gives us an we’re proud to be giving amazing link to the past something back.” and the debt owed to Cranwell-based people like Johnny so Cadets Chief of Staff Wg

Cdr Mike Ainsworth completed the route as part of his bid to cover 5,600 miles in honour of the 56 airmen who died during the raid.

THIS YEAR’S RAF Cosford Air Show has been cancelled, the organisers have announced. The event was due to go ahead over the weekend of September 11-12. A spokesperson said: “We are devastated to be in this position once again but the health and safety of the public and our serving personnel, and the financial security of future shows, must be our priorities.” Customers who have held onto their tickets will be able to request a refund through the website at cosfordairshow. co.uk/tickets or they can carry their tickets over to the RAF Cosford Air Show 2022.

AIR FORCE Reservists have netted more than £7,000 with a marathon fundraising challenge for an RAF medic with terminal cancer. Flt Lt James Iddon, a 4626 Sqn nursing officer and NHS clinical site manager, was diagnosed with the disease in his head and neck during the first wave of the coronavirus pandemic. After undergoing chemotherapy, radiotherapy and surgery at Bristol Haematology and Oncology Centre he returned to NHS and RAF duties at the beginning of the second wave of Covid-19 and signed up to run the London Marathon for Above and Beyond – the hospital’s charity. But in May Flt Lt Iddon heard his cancer had returned, spread to his lungs and chest, and was terminal, leaving him unable to complete the challenge. So 18 of his Brize Norton comrades decided to do their own virtual marathons to help hit his target. Flt Lt Iddon said: “I’m very lucky to be a member of a great RAF team. They’ve all pushed themselves in their own way to do it. “I’m amazed at their ability to go ‘you’re part of our team and what’s your challenge is our challenge’. “What they’re achieving on their

own and on my behalf is such a morale boost when you’re going through difficult times – and when you’re dealing with a terminal diagnosis it puts a little spring in your step when not much else does. “I just feel really cared for. It’s amazing. “Finding out the cancer had spread to my lungs was the most devastating bit of the whole journey. “At the time it didn’t feel real. The day I heard that diagnosis I was doing marathon training. To let the information sink in I went out and ran 12 miles. “The fundraising has continued to go way past the target, which is a lovely thing to see. It’s just showing me that they’re there for me.” Above and Beyond raises money for the most up-to-date equipment, more comfortable surroundings and innovative research. Flight Commander Sqn Ldr Sarah Charters said: “James is an ITU nurse by background, has been a member of 4626 Sqn for 10 years, and has deployed to undertake aeromedical support during Op Herrick in Afghanistan. “He is a rising star within our squadron, having commissioned from the ranks, and provides outstanding nursing leadership within our team.”