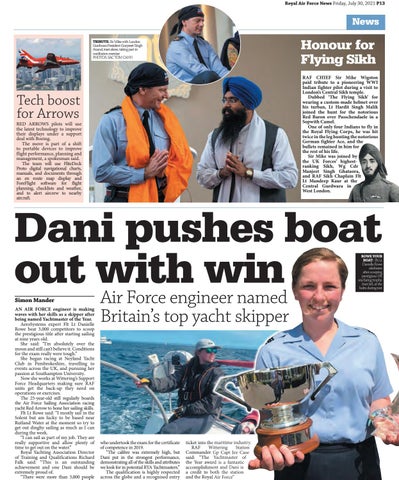 RAF CHIEF Sir Mike Wigston paid tribute to a pioneering WWI Indian fighter pilot during a visit to London’s Central Sikh temple. Dubbed ‘The Flying Sikh’ for wearing a custom-made helmet over his turban, Lt Hardit Singh Malik joined the hunt for the notorious Red Baron over Passchendaele in a Sopwith Camel. One of only four Indians to fly in the Royal Flying Corps, he was hit twice in the leg hunting the notorious German fighter Ace, and the bullets remained in him for the rest of his life. Sir Mike was joined by the UK Forces’ highestranking Sikh, Wg Cdr Manjeet Singh Ghataora, and RAF Sikh Chaplain Flt Lt Mandeep Kaur at the Central Gurdwara in West London.

RED ARROWS pilots will use the latest technology to improve their displays under a support deal with Boeing. The move is part of a shift to portable devices to improve flight performance, planning and management, a spokesman said. The team will use FliteDeck Proto digital navigational charts, manuals, and documents through an en route map display and ForeFlight software for flight planning, checklists and weather, and to alert aircrew to nearby aircraft.

AN AIR FORCE engineer is making waves with her skills as a skipper after being named Yachtmaster of the Year. AeroSystems expert Flt Lt Danielle Rowe beat 3,000 competitors to scoop the prestigious title after starting sailing at nine years old. She said: “I’m absolutely over the moon and still can’t believe it. Conditions for the exam really were tough.” She began racing at Neyland Yacht Club in Pembrokeshire, travelling to events across the UK, and pursuing her passion at Southampton University. Now she works at Wittering’s Support Force Headquarters making sure RAF units get the back-up they need on operations or exercises. The 25-year-old still regularly boards the Air Force Sailing Association racing yacht Red Arrow to hone her sailing skills. Flt Lt Rowe said: “I mostly sail in the Solent but am lucky to be based near Rutland Water at the moment so try to get out dinghy sailing as much as I can during the week. “I can sail as part of my job. They are really supportive and allow plenty of time to get out on the water.” Royal Yachting Association Director of Training and Qualifications Richard Falk said: “This is an outstanding achievement and one Dani should be extremely proud of. “There were more than 3,000 people

who undertook the exam for the certificate of competence in 2019. “The calibre was extremely high, but Dani put in the strongest performance, demonstrating all of the skills and attributes we look for in potential RYA Yachtmasters.” The qualification is highly respected across the globe and a recognised entry

ticket into the maritime industry. RAF Wittering Station Commander Gp Capt Jez Case said: “The Yachtmaster of the Year award is a fantastic accomplishment and Dani is a credit to both the station and the Royal Air Force”