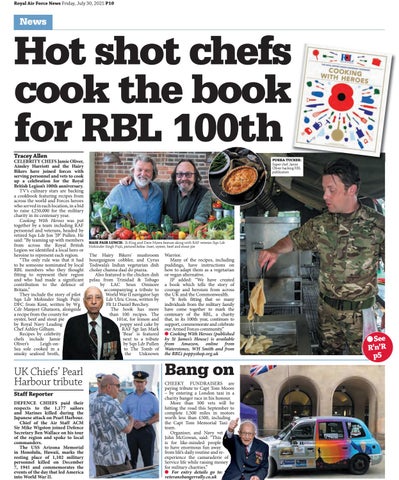 CELEBRITY CHEFS Jamie Oliver, Ainsley Harriott and the Hairy Bikers have joined forces with serving personnel and vets to cook up a celebration for the Royal British Legion’s 100th anniversary. TV’s culinary stars are backing a cookbook featuring recipes from across the world and Forces heroes who served in each location, in a bid to raise £250,000 for the military charity in its centenary year. Cooking With Heroes was put together by a team including RAF personnel and veterans, headed by retired Sqn Ldr Jon ‘JP’ Pullen. He said: “By teaming up with members from across the Royal British Legion we identified a local hero or heroine to represent each region. “The only rule was that it had to be someone nominated by local RBL members who they thought fitting to represent their region and who had made a significant contribution to the defence of Britain.” They include the story of pilot Sqn Ldr Mohinder Singh Pujii DFC from Kent, written by Wg Cdr Manjeet Ghataora, alongside a recipe from the county for oyster, beef and stout pie by Royal Navy Leading Chef Ashley Gilham. Recipes by celebrity chefs include Jamie Oliver’s Leigh-onSea sole cooked in a smoky seafood broth,

UK Chiefs’ Pearl Harbour tribute Staff Reporter DEFENCE CHIEFS paid their respects to the 1,177 sailors and Marines killed during the Japanese attack on Pearl Harbour. Chief of the Air Staff ACM Sir Mike Wigston joined Defence Secretary Ben Wallace on his tour of the region and spoke to local commanders. The USS Arizona Memorial in Honolulu, Hawaii, marks the resting place of 1,102 military personnel killed on December 7, 1941 and commemorates the events of the day that led America into World War II.

The Hairy Bikers’ mushroom bourguignon cobbler, and Cyrus Todiwala’s Indian vegetarian dish cholay channa daal do piazza. Also featured is the chicken dish pelau from Trinidad & Tobago by LAC Seun Omisore accompanying a tribute to World War II navigator Sqn Ldr Ulric Cross, written by Flt Lt Daniel Beechey. The book has more than 100 recipes. The 101st, for lemon and poppy seed cake by RAF Sgt Ian Mark ‘Bear’ is featured next to a tribute by Sqn Ldr Pullen to The Tomb of the Unknown

Warrior. Many of the recipes, including puddings, have instructions on how to adapt them as a vegetarian or vegan alternative. JP added: “We have created a book which tells the story of courage and heroism from across the UK and the Commonwealth. “It feels fitting that so many individuals from the military family have come together to mark the centenary of the RBL, a charity that, in its 100th year, continues to support, commemorate and celebrate our Armed Forces community.” Cooking With Heroes (published by St James’s House) is available from Amazon, online from Waterstones, WH Smith and from the RBL’s poppyshop.org.uk

Bang on CHEEKY FUNDRAISERS are paying tribute to Capt Tom Moore – by entering a London taxi in a charity banger race in his honour. More than 500 vets will be hitting the road this September to complete 1,500 miles in motors worth less than £500, including the Capt Tom Memorial Taxi team. Organiser, and Navy vet John McGowan, said: “This is for like-minded people to have enormous fun away from life’s daily routine and reexperience the camaraderie of Service life while raising money for military charities.” For entry details go to: veteransbangerrally.co.uk