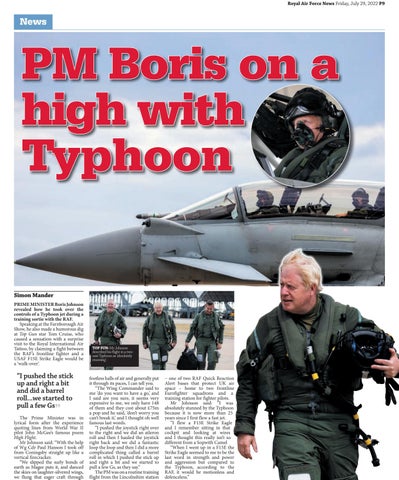 PM Boris on a high with Typhoon Simon Mander PRIME MINISTER Boris Johnson revealed how he took over the controls of a Typhoon jet during a training sortie with the RAF. Speaking at the Farnborough Air Show, he also made a humorous dig at Top Gun star Tom Cruise, who caused a sensation with a surprise visit to the Royal International Air Tattoo, by claiming a fight between the RAF’s frontline fighter and a USAF F15E Strike Eagle would be a ‘walk-over’.

“I pushed the stick up and right a bit and did a barrel roll...we started to pull a few Gs

The Prime Minister was in lyrical form after the experience quoting lines from World War II pilot John McGee’s famous poem High Flight. Mr Johnson said: “With the help of Wg Cdr Paul Hanson I took off from Coningsby straight up like a vertical firecracker. “We slipped the surly bonds of earth as Magee puts it, and danced the skies on laughter-silvered wings, we flung that eager craft through

footless halls of air and generally put it through its paces, I can tell you. “The Wing Commander said to me ‘do you want to have a go,’ and I said are you sure, it seems very expensive to me, we only have 148 of them and they cost about £75m a pop and he said, ‘don’t worry you can’t break it,’ and I thought oh well famous last words. “I pushed the joystick right over to the right and we did an aileron roll and then I hauled the joystick right back and we did a fantastic loop the loop and then I did a more complicated thing called a barrel roll in which I pushed the stick up and right a bit and we started to pull a few Gs, as they say.” The PM was on a routine training flight from the Lincolnshire station

– one of two RAF Quick Reaction Alert bases that protect UK air space – home to two frontline Eurofighter squadrons and a training station for fighter pilots. Mr Johnson said: “I was absolutely stunned by the Typhoon because it is now more than 25 years since I first flew a fast jet. “I flew a F15E Strike Eagle and I remember sitting in that cockpit and looking at wires and I thought this really isn’t so different from a Sopwith Camel “When I went up in a F15E the Strike Eagle seemed to me to be the last word in strength and power and aggression but compared to the Typhoon, according to the RAF, it would be motionless and defenceless.”