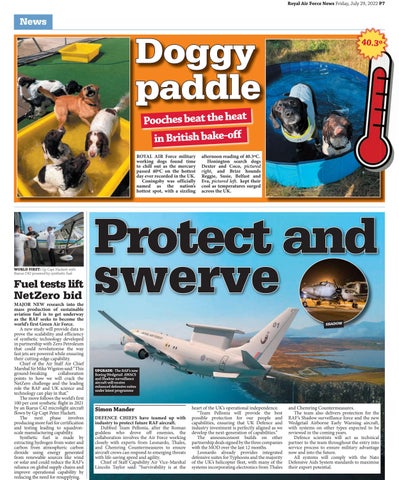 Pooches beat the heat in British bake-off ROYAL AIR Force military working dogs found time to chill out as the mercury passed 40ºC on the hottest day ever recorded in the UK. Coningsby was officially named as the nation’s hottest spot, with a sizzling

MAJOR NEW research into the mass production of sustainable aviation fuel is to get underway as the RAF seeks to become the world’s first Green Air Force. A new study will provide data to prove the scalability and efficiency of synthetic technology developed in partnership with Zero Petroleum that could revolutionise the way fast jets are powered while ensuring their cutting-edge capability. Chief of the Air Staff Air Chief Marshal Sir Mike Wigston said:“This ground-breaking collaboration points to how we will crack the NetZero challenge and the leading role the RAF and UK science and technology can play in that.” The move follows the world’s first 100 per cent synthetic flight in 2021 by an Ikarus C42 microlight aircraft flown by Gp Capt Peter Hackett. The next phase involves producing more fuel for certification and testing leading to squadronscale manufacturing capability. Synthetic fuel is made by extracting hydrogen from water and carbon from atmospheric carbon dioxide using energy generated from renewable sources like wind or solar and could reduce the RAF’s reliance on global supply chains and improve operational capability by reducing the need for resupplying.

Simon Mander DEFENCE CHIEFS have teamed up with industry to protect future RAF aircraft. Dubbed Team Pellonia, after the Roman goddess who drove off enemies, the collaboration involves the Air Force working closely with experts from Leonardo, Thales, and Chemring Countermeasures to ensure aircraft crews can respond to emerging threats with life-saving speed and agility. Chief of Staff Capability Air Vice-Marshal Lincoln Taylor said: “Survivability is at the

heart of the UK’s operational independence. “Team Pellonia will provide the best possible protection for our people and capabilities, ensuring that UK Defence and industry investment is perfectly aligned as we develop the next-generation of capabilities.” The announcement builds on other partnership deals signed by the three companies with the MOD over the last 12 months. Leonardo already provides integrated defensive suites for Typhoons and the majority of the UK’s helicopter fleet, with many of the systems incorporating electronics from Thales

and Chemring Countermeasures. The team also delivers protection for the RAF’s Shadow surveillance force and the new Wedgetail Airborne Early Warning aircraft, with systems on other types expected to be reviewed in the coming years. Defence scientists will act as technical partner to the team throughout the entry into service process to ensure military advantage now and into the future. All systems will comply with the Nato Defensive Aids System standards to maximise their export potential.