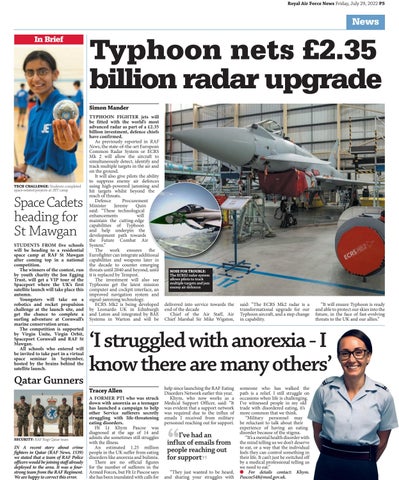 Space Cadets heading for St Mawgan STUDENTS FROM five schools will be heading to a residential space camp at RAF St Mawgan after coming top in a national competition. The winners of the contest, run by youth charity the Jon Egging Trust, will get a VIP tour of the Spaceport where the UK’s first satellite launch will take place this autumn. Youngsters will take on a robotics and rocket propulsion challenge at the launch site, and get the chance to complete a surfing adventure at Cornwall’s marine conservation areas. The competition is supported by Virgin Unite, Virgin Orbit, Spaceport Cornwall and RAF St Mawgan. All schools who entered will be invited to take part in a virtual space seminar in September, hosted by the brains behind the satellite launch.

IN A recent story about crime fighters in Qatar (RAF News, 1539) we stated that a team of RAF Police officers would be joining staff already deployed to the area. It was a fourstrong team from the RAF Regiment. We are happy to correct this error.

TYPHOON FIGHTER jets will be fitted with the world’s most advanced radar as part of a £2.35 billion investment, defence chiefs have confirmed. As previously reported in RAF News, the state-of-the-art European Common Radar System or ECRS Mk 2 will allow the aircraft to simultaneously detect, identify and track multiple targets in the air and on the ground. It will also give pilots the ability to suppress enemy air defences using high-powered jamming and hit targets whilst beyond the reach of threats. Defence Procurement Minister Jeremy Quin said: “These technological enhancements will maintain the cutting-edge capabilities of Typhoon and help underpin the development path towards the Future Combat Air System.” The work ensures the Eurofighter can integrate additional capabilities and weapons later in the decade to counter emerging threats until 2040 and beyond, until it is replaced by Tempest. The investment will also see Typhoons get the latest mission computer and cockpit interface, an improved navigation system and signal-jamming technology. ECRS Mk2 is being developed by Leonardo UK in Edinburgh and Luton and integrated by BAE Systems in Warton and will be

delivered into service towards the end of the decade Chief of the Air Staff, Air Chief Marshal Sir Mike Wigston,

said: “The ECRS Mk2 radar is a transformational upgrade for our Typhoon aircraft, and a step change in capability.

“It will ensure Typhoon is ready and able to protect our skies into the future, in the face of fast-evolving threats to the UK and our allies.”

A FORMER PTI who was struck down with anorexia as a teenager has launched a campaign to help other Service sufferers secretly struggling with life-threatening eating disorders. Flt Lt Khym Pascoe was diagnosed at the age of 14 and admits she sometimes still struggles with the illness. An estimated 1.25 million people in the UK suffer from eating disorders like anorexia and bulimia. There are no official figures for the number of sufferers in the Armed Forces, but Flt Lt Pascoe says she has been inundated with calls for

help since launching the RAF Eating Disorders Network earlier this year. Khym, who now works as a Medical Support Officer, said: “It was evident that a support network was required due to the influx of emails I received from military personnel reaching out for support.

“They just wanted to be heard, and sharing your struggles with

someone who has walked the path is a relief. I still struggle on occasions when life is challenging. I’ve witnessed people in my old trade with disordered eating, it’s more common that we think. “Military personnel may be reluctant to talk about their experience of having an eating disorder because of the stigma. “It’s a mental health disorder with the mind telling us we don’t deserve to eat, or a way that the individual feels they can control something in their life. It can’t just be switched off by a medical professional telling us we need to eat.” l For details contact: Khym. Pascoe548@mod.gov.uk.