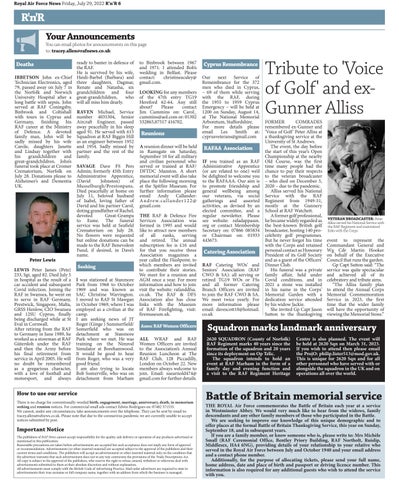 Deaths IBBETSON John ex-Chief Technician Electronics, aged 79, passed away on July 7 in the Norfolk and Norwich University Hospital after a long battle with sepsis. John served at RAF Coningsby, Binbrook and Coltishall with tours in Cyprus and Germany, finishing his RAF career at the Ministry of Defence. A devoted family man, John will be sadly missed by his wife Carole, daughters Janette and Lindsay together with his grandchildren and great-grandchildren. John’s funeral took place at Cromer Crematorium, Norfolk on July 28. Donations please to Alzheimer’s and Dementia UK.

Peter Lewis LEWIS Peter James (Pete) 233, Sgt, aged 82. Died July 5 in hospital as the result of a car accident and subsequent Covid infection. Joining the RAF in Swansea, he went on to serve in RAF Germany, Prestwick, Singapore, Malta, GRSS Henlow, CIO Swansea and 12SU Cyprus, finally being discharged while at St Eval in Cornwall. After retiring from the RAF to Germany in June 1989, he worked as a storeman at RAF Gütersloh under the RAF and then the Army before his final retirement from service in April 2005. He will no doubt be remembered as a gregarious character, with a love of football and motorsport, and always

ready to banter in defence of the RAF. He is survived by his wife, Heidi-Barbel (Barbara) and three daughters, Dagmar, Renate and Natasha, six grandchildren and four great-grandchildren, who will all miss him dearly. RAVEN Michael, Service number 4035304, Senior Aircraft Engineer, passed away peacefully in his sleep aged 91. He served with 615 Squadron at RAF Biggin Hill as an engineer between 1952 and 1954. Sadly missed by partner and the rest of the family. SAVAGE Dave FS Pers Admin; formerly 45th Entry Administrative Apprentice, (David Johnston) of Musselburgh/Prestonpans. Died peacefully at home on July 11, beloved husband of Isabel, loving father of David and his partner Carol, doting grandfather of Rachel, devoted Great-Grampa to Esme. The funeral service was held at Seafield Crematorium on July 28. No flowers were requested but online donations can be made to the RAF Benevolent Fund, if desired, in Dave’s name.

Seeking I was stationed at Stanmore Park from 1968 to October 1969 and was known as SAC Christine Warrington. I moved to RAF St Mawgan in October 1969, where I was employed as a civilian at the camp. I am seeking news of JT Roger (Ginge ) Summerfield/ Somerfield who was on detachment at Stanmore Park where we met. He was training on the Nimrod Simulator at Borehamwood. It would be good to hear from Roger, who was a very good friend. I am also trying to locate Bob Somerville, who was on detachment from Marham

Reunions A reunion dinner will be held in Ramsgate on Saturday, September 10 for all military and civilian personnel who served or trained at RAF/ DFTDC Manston. A short memorial event will also take place the following morning at the Spitfire Museum. For further information please email Andy Callander: A n d r e w. c a l l a n d e r 1 2 2 @ gmail.com THE RAF &amp; Defence Fire Services Association was formed in 1995 and would like to attract new members of all ranks, serving and retired. The annual subscription fee is £16 and for that you receive three Association magazines a year called the Flashpoint, to which members are invited to contribute their stories. We meet for a reunion and AGM once a year. For more information and how to join visit the website: rafanddfsa. co.uk. The RAF &amp; DFS Association also has close links with the Museum of RAF Firefighting, visit: firemuseum.uk.

Cyprus Remembrance Our next Service of Remembrance for the 372 men who died in Cyprus, – 69 of them while serving with the RAF, during the 1955 to 1959 Cyprus Emergency – will be held at 1200 on Sunday, August 14, at The National Memorial Arboretum, Staffordshire. For more details please email Les Smith at: cyprusveterans@gmail.com

RAFAA Association IF you trained as an RAF Administrative Apprentice (or are related to one) we’d be delighted to welcome you to the RAFAAA. Our aim is to promote friendship and general wellbeing among our veterans, via social gatherings and assorted activities, as devised by an elected committee, and a regular newsletter. Please see website: rafadappassn. org or contact Membership Secretary on: 07866 085834 or Chairman on: 01933 443673.

Tribute to &#39;Voice of Golf&#39; and exGunner Alliss FORMER COMRADES remembered ex-Gunner and ‘Voice of Golf &#39; Peter Alliss at a thanksgiving service at the University of St Andrews. The event, the day before the start of this year’s Open Championship at the nearby Old Course, was the first time many people had the chance to pay their respects to the veteran broadcaster – who died on December 5, 2020 – due to the pandemic. Alliss served his National Service with the RAF Regiment from 1949-51, mostly at the Gunnery School at RAF Watchett. A former golf professional, he became widely regarded as the best-known British golf broadcaster, hosting 140 procelebrity golf programmes. But he never forgot his time with the Corps and retained personal contact as Honorary President of its Golf Society and as a guest of the Officers’ Dinner Club. His funeral was a private family affair, held under Covid conditions, and in 2021 a stone was installed in his name in the Corps’ Memorial Garden with a dedication service attended by his widow Jackie. She invited Gp Capt Jason Sutton to the thanksgiving

VETERAN BROADCASTER: Peter Alliss served his National Service with the RAF Regiment and maintained links with the Corps

event to represent the Commandant General and Wg Cdr Martin Hooker on behalf of the Executive Council that runs the garden. Gp Capt Sutton said: “The service was quite spectacular and achieved all of its celebratory and tribute aims. “The Alliss family plan to attend the Annual Corps Memorial Commemoration Service in 2023, the first time that the wider family will have the opportunity of viewing the Memorial Stone.”

2620 SQUADRON (County of Norfolk) RAF Regiment marks 40 years since the formation of the squadron and 20 years since its deployment on Op Telic. The squadron intends to hold an event at RAF Marham in the form of a family day and evening function and a visit to the RAF Regiment Heritage

How to use our service There is no charge for conventionally-worded birth, engagement, marriage, anniversary, death, in memoriam seeking and reunion notices. For commercial small ads contact Edwin Rodrigues on: 07482 571535. We cannot, under any circumstances, take announcements over the telephone. They can be sent by email to: tracey.allen@rafnews.co.uk. Please note that due to the coronavirus pandemic we are currently unable to accept notices submitted by post.

Important Notice The publishers of RAF News cannot accept responsibility for the quality, safe delivery or operation of any products advertised or mentioned in this publication. Reasonable precautions are taken before advertisements are accepted but such acceptance does not imply any form of approval or recommendation. Advertisements (or other inserted material) are accepted subject to the approval of the publishers and their current terms and conditions. The publishers will accept an advertisement or other inserted material only on the condition that the advertiser warrants that such advertisement does not in any way contravene the provisions of the Trade Descriptions Act. All copy is subject to the approval of the publishers, who reserve the right to refuse, amend, withdraw or otherwise deal with advertisements submitted to them at their absolute discretion and without explanation. All advertisements must comply with the British Code of Advertising Practice. Mail order advertisers are required to state in advertisements their true surname or full company name, together with an address from which the business is managed.

Centre is also planned. The event will be held at 2620 Sqn on March 31, 2023. If you wish to attend then please email the ProjO: philip.lister513@mod.gov.uk. This is unique for 2620 Sqn and for all other personnel who have served with or alongside the squadron in the UK and on operations all over the world.

THE ROYAL Air Force commemorates the Battle of Britain each year at a service in Westminster Abbey. We would very much like to hear from the widows, family descendants and any other family members of those who participated in the Battle. We are seeking to improve our knowledge of this unique demographic and to offer places at the formal Battle of Britain Thanksgiving Service, this year on Sunday, September 18, and in subsequent years. If you are a family member, or know someone who is, please write to: Mrs Michèle Small (RAF Ceremonial Office, Bentley Priory Building, RAF Northolt, Ruislip, Middlesex, HA4 6NG), providing details of your relationship to your relative who served in the Royal Air Force between July and October 1940 and your email address and a contact phone number. Additionally, for the purpose of allocating tickets, please send your full name, home address, date and place of birth and passport or driving licence number. This information is also required for any additional guests who wish to attend the service with you.