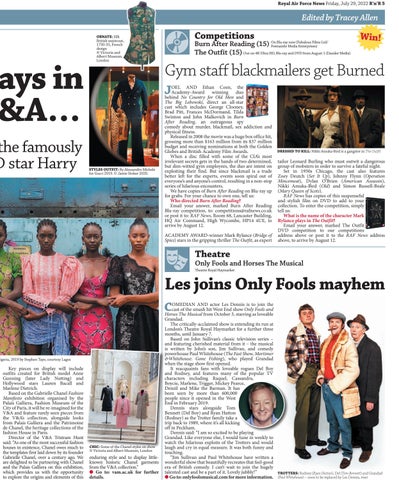 OEL AND Ethan Coen, the Academy-Award winning duo behind No Country for Old Men and The Big Lebowski, direct an all-star cast which includes George Clooney, Brad Pitt, Frances McDormand, Tilda Swinton and John Malkovich in Burn After Reading, an outrageous spy comedy about murder, blackmail, sex addiction and physical fitness. Released in 2008 the movie was a huge box office hit, grossing more than $163 million from its $37 million budget and receiving nominations at both the Golden Globes and British Academy Film Awards. When a disc filled with some of the CIA’s most irrelevant secrets gets in the hands of two determined, but dim-witted gym employees, the duo are intent on exploiting their find. But since blackmail is a trade better left for the experts, events soon spiral out of everyone’s and anyone’s control, resulting in a non-stop series of hilarious encounters. We have copies of Burn After Reading on Blu-ray up for grabs. For your chance to own one, tell us: Who directed Burn After Reading? Email your answer, marked Burn After Reading Blu-ray competition, to: competitions@rafnews.co.uk or post it to: RAF News, Room 68, Lancaster Building, HQ Air Command, High Wycombe, HP14 4UE, to arrive by August 12. ACADEMY AWARD-winner Mark Rylance (Bridge of Spies) stars in the gripping thriller The Outfit, as expert

DRESSED TO KILL: Nikki Amuka-Bird is a gangster in The Outfit

tailor Leonard Burling who must outwit a dangerous group of mobsters in order to survive a fateful night. Set in 1950s Chicago, the cast also features Zoey Deutch (Set It Up), Johnny Flynn (Operation Mincemeat), Dylan O’Brien (American Assassin), Nikki Amuka-Bird (Old) and Simon Russell-Beale (Mary Queen of Scots). RAF News has copies of this suspenseful and stylish film on DVD to add to your collection. To enter the competition, simply tell us: What is the name of the character Mark Rylance plays in The Outfit? Email your answer, marked The Outfit DVD competition to our competitions address above or post it to the RAF News address above, to arrive by August 12.

Only Fools and Horses The Musical Theatre Royal Haymarket

Key pieces on display will include outfits created for British model Anne Gunning (later Lady Nutting) and Hollywood stars Lauren Bacall and Marlene Dietrich. Based on the Gabrielle Chanel Fashion Manifesto exhibition organised by the Palais Galliera, Fashion Museum of the City of Paris, it will be re-imagined for the V&amp;A and feature rarely seen pieces from the V&amp;A’s collection, alongside looks from Palais Galliera and the Patrimoine de Chanel, the heritage collections of the fashion House in Paris. Director of the V&amp;A Tristram Hunt said: “As one of the most successful fashion houses in existence, Chanel owes much to the templates first laid down by its founder Gabrielle Chanel, over a century ago. We are delighted to be partnering with Chanel and the Palais Galliera on this exhibition, which provides us with the opportunity to explore the origins and elements of this

CHIC: Some of the Chanel styles on show © Victoria and Albert Museum, London

enduring style and to display littleknown historic Chanel garments from the V&amp;A collection.” l Go to: vam.ac.uk for further details.

OMEDIAN AND actor Les Dennis is to join the cast of the smash hit West End show Only Fools and Horses The Musical from October 3, starring as loveable Grandad. The critically-acclaimed show is extending its run at London’s Theatre Royal Haymarket for a further three months, until January 7. Based on John Sullivan’s classic television series – and featuring cherished material from it – the musical is written by John’s son, Jim Sullivan, and comedy powerhouse Paul Whitehouse (The Fast Show, Mortimer &amp;Whitehouse: Gone Fishing), who played Grandad when the stage show first opened. It reacquaints fans with loveable rogues Del Boy and Rodney, and features many of the popular TV characters including Raquel, Cassandra, Boycie, Marlene, Trigger, Mickey Pearce, Denzil and Mike the Barman. It has been seen by more than 600,000 people since it opened in the West End in February 2019. Dennis stars alongside Tom Bennett (Del Boy) and Ryan Hutton (Rodney) as the Trotter family take a trip back to 1989, where it’s all kicking off in Peckham. Dennis said: “I am so excited to be playing Grandad. Like everyone else, I would tune in weekly to watch the hilarious exploits of the Trotters and would laugh and cry in equal measure. It was both funny and touching. “Jim Sullivan and Paul Whitehouse have written a wonderful show that beautifully recreates that feel-good era of British comedy. I can’t wait to join the hugely talented cast and be a part of it. Lovely jubbly!” l Go to: onlyfoolsmusical.com for more information.