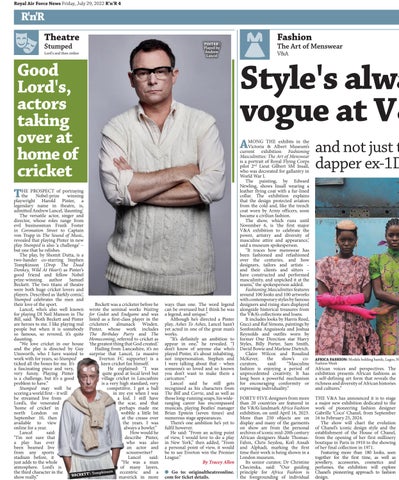 Good Lord&#39;s, actors taking over at home of cricket

The Art of Menswear V&amp;A

HE PROSPECT of portraying the Nobel-prize winning playwright Harold Pinter, a legendary name in theatre, is, admitted Andrew Lancel, ‘daunting’. The versatile actor, singer and director, whose roles range from evil businessman Frank Foster in Coronation Street to Captain von Trapp in The Sound of Music, revealed that playing Pinter in new play Stumped is also ‘a challenge’ – but one that he relishes. The play, by Shomit Dutta, is a two-hander co-starring Stephen Tompkinson (Drop The Dead Donkey, Wild At Heart) as Pinter’s good friend and fellow Nobel prize-winning author Samuel Beckett. The two titans of theatre were both huge cricket lovers and players. Described as ‘darkly comic’, Stumped celebrates the men and their love of the sport. Beckett was a cricketer before he Lancel, who’s also well known wrote the seminal works Waiting for playing DI Neil Manson in The for Godot and Endgame and was Bill, said: “Both Beckett and Pinter listed as a first-class player in the are heroes to me. I like playing real cricketers’ almanack Wisden. people but when it is somebody Pinter, whose work includes so famous, so revered, it’s quite The Birthday Party and The daunting. Homecoming, referred to cricket as “We love cricket in our house ‘the greatest thing that God created.’ and the play is directed by Guy Hailing from Lancashire, it’s no Unsworth, who I have wanted to surprise that Lancel, (a massive work with for years, so Stumped Everton FC supporter) is a ticked all the boxes for me. It’s keen cricket fan himself. a fascinating piece and very, He explained: “I was very funny. Playing Pinter quite good at local level but is a challenge, but it’s a good village cricket in Lancashire problem to have.” is a very high standard, very Stumped may well be competitive. I got a ball scoring a world first – it will in my eye when I was be streamed live from a kid, I still have Lord’s, the venerated the scar, and that ‘home of cricket’ in perhaps made me north London on wobble a little bit at the crease over September 10, then the years. I was available to view online for a year. always a bowler.” How would he Lancel said: describe Pinter, “I’m not sure that who was also a play has ever an actor and been beamed live screenwriter? from any sports Lancel said: stadium before, it “He was a man just adds to the whole of many layers, atmosphere. Lord’s is inson eccentric and a the third character in the pk m To &#39;: T &#39;BECKET maverick in more show really.”

ways than one. The word legend can be overused but I think he was a legend, and unique.” Although he’s directed a Pinter play, Ashes To Ashes, Lancel hasn’t yet acted in one of the great man’s works. “It’s definitely an ambition to appear in one,” he revealed. “I don’t know of anyone else who’s played Pinter, it’s about inhabiting, not impersonation. Stephen and I were talking about that – when someone’s so loved and so known you don’t want to make them a caricature.” Lancel said he still gets recognised as his characters from The Bill and Corrie, and as well as those long-running soaps, his wideranging career has encompassed musicals, playing Beatles’ manager Brian Epstein (seven times) and numerous stage appearances. There’s one ambition he’s yet to fulfil however. He said: “From an acting point of view, I would love to do a play in New York,” then added, “From a personal point of view, it would be to see Everton win the Premier League.” By Tracey Allen l Go to: originaltheatreonline. com for ticket details.

MONG THE exhibits in the Victoria &amp; Albert Museum’s current exhibition Fashioning Masculinities: The Art of Menswear is a portrait of Royal Flying Corps pilot 2nd Lieut Gilbert SM Insall, who was decorated for gallantry in World War I. The painting, by Edward Newling, shows Insall wearing a leather flying coat with a fur-lined collar. The exhibition explains that the design protected aviators from the cold and, like the trench coat worn by Army officers, soon became a civilian fashion. The show, which runs until November 6, is ‘the first major V&amp;A exhibition to celebrate the power, artistry and diversity of masculine attire and appearance,’ said a museum spokesperson. “It traces how menswear has been fashioned and refashioned over the centuries, and how designers, tailors and artists – and their clients and sitters – have constructed and performed masculinity, and unpicked it at the seams,” the spokesperson added. Fashioning Masculinities features around 100 looks and 100 artworks with contemporary styles by famous designers and rising stars displayed alongside historical treasures from the V&amp;A’s collections and loans. It includes looks by Harris Reed, Gucci and Raf Simons, paintings by Sonfonisba Anguissola and Joshua Reynolds and outfits worn by former One Direction star Harry Styles, Billy Porter, Sam Smith, David Bowie and Marlene Dietrich. Claire Wilcox and Rosalind McKever, the show’s cocurators, said: “Masculine fashion is enjoying a period of unprecedented creativity. It has long been a powerful mechanism for encouraging conformity or expressing individuality.”

and not just t dapper ex-1D

FORTY-FIVE designers from more than 20 countries are featured in the V&amp;A’s landmark Africa Fashion exhibition, on until April 16, 2023. More than 250 objects are on display and many of the garments on show are from the personal archives of iconic mid-20th century African designers Shade ThomasFahm, Chris Seydou, Kofi Ansah and Alphadi, marking the first time their work is being shown in a London museum. Its senior curator, Dr Christine Checinska, said: “Our guiding principle for Africa Fashion is the foregrounding of individual

THE V&amp;A has announced it is to stage a major new exhibition dedicated to the work of pioneering fashion designer Gabrille ‘Coco’ Chanel, from September 16 to February 25, 2024. The show will chart the evolution of Chanel’s iconic design style and the establishment of the House of Chanel, from the opening of her first millinery boutique in Paris in 1910 to the showing of her final collection in 1971. Featuring more than 180 looks, seen together for the first time, as well as jewellery, accessories, cosmetics and perfumes, the exhibition will explore Chanel’s pioneering approach to fashion design.

African voices and perspectives. The exhibition presents African fashions as a self-defining art form that reveals the richness and diversity of African histories and cultures.”