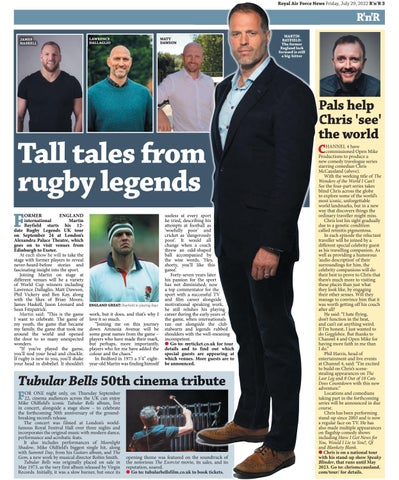 ORMER ENGLAND international Martin Bayfield starts his 12date Rugby Legends UK tour on September 24 at London’s Alexandra Palace Theatre, which goes on to visit venues from Edinburgh to Exeter. At each show he will to take the stage with former players to reveal never-heard-before stories and fascinating insight into the sport. Joining Martin on stage at different venues will be a variety of World Cup winners including Lawrence Dallaglio, Matt Dawson, Phil Vickery and Ben Kay, along with the likes of Brian Moore, James Haskell, Jason Leonard and Sean Fitzpatrick. Martin said: “This is the game I want to celebrate. The game of my youth, the game that became my family, the game that took me around the world and opened the door to so many unexpected wonders. “If you’ve played the game, you’ll nod your head and chuckle. If rugby is new to you, you’ll shake your head in disbelief. It shouldn’t

work, but it does, and that’s why I love it so much. “Joining me on this journey down Amnesia Avenue will be some great names from the game – players who have made their mark, but perhaps, more importantly, players who for me have added the colour and the chaos.” In Bedford in 1975 a 5’4” eightyear-old Martin was finding himself

useless at every sport he tried, describing his attempts at football as ‘woefully poor’ and cricket as ‘dangerously poor’. It would all change when a coach threw an odd-shaped ball accompanied by the wise words, ‘Hey, shorty, you’ll like this game’. Forty-seven years later his passion for the sport has not diminished; now a top commentator for the sport with a successful TV and film career alongside motivational speaking work, he still relishes his playing career during the early years of the game, when internationals ran out alongside the club stalwarts and legends rubbed shoulders with the well-meaning incompetent. l Go to: myticket.co.uk for tour details and to find out which special guests are appearing at which venues. More guests are to be announced.

OR ONE night only, on Thursday September 22, cinema audiences across the UK can enjoy Mike Oldfield’s iconic Tubular Bells album, live in concert, alongside a stage show – to celebrate the forthcoming 50th anniversary of the groundbreaking record’s release. The concert was filmed at London’s worldfamous Royal Festival Hall over three nights and incorporates the original music with modern dance, performance and acrobatic feats. It also includes performances of Moonlight Shadow, Mike Oldfield’s biggest single hit, along with Summit Day, from his Guitars album, and The Gem, a new work by musical director Robin Smith. Tubular Bells was originally placed on sale in May 1973, as the very first album released by Virgin Records. Initially, it was a slow burner, but once its

opening theme was featured on the soundtrack of the notorious The Exorcist movie, its sales, and its reputation, soared. l Go to: tubularbellsfilm.co.uk to book tickets.

HANNEL 4 have commissioned Open Mike Productions to produce a new comedy travelogue series starring comedian Chris McCausland (above). ( With the working title of The Wonders of the World I Can’t See the four-part series takes blind Chris across the globe to explore some of the world’s most iconic, unforgettable world landmarks, but in a new way that discovers things the ordinary traveller might miss. Chris lost his sight gradually due to a genetic condition called retinitis pigmentosa. In each episode the reluctant traveller will be joined by a different special celebrity guest as his travelling companion. As well as providing a humorous ‘audio description’ of their surroundings for him, the celebrity companions will do their best to prove to Chris that there’s much more to visiting these places than just what they look like, by engaging their other senses. Will they manage to convince him that it was worth getting off his couch after all? He said: “I hate flying, don’t function in the heat, and can’t eat anything weird. If I’m honest, I just wanted to do Gogglebox. But thanks to Channel 4 and Open Mike for having more faith in me than I do.” Phil Harris, head of entertainment and live events at Channel 4, said: “I’m excited to build on Chris’s scenestealing appearances on The Last Leg and 8 Out of 10 Cats Does Countdown with this new adventure.” Locations and comedians taking part in the forthcoming series will be announced in due course. Chris has been performing stand-up since 2003 and is now a regular face on TV. He has also made multiple appearances on flagship comedy shows including Have I Got News for You, Would I Lie to You?, QI and Blankety Blank. l Chris is on a national tour with his stand-up show Speaky Blinder that runs until May Blinder, 2023. Go to: chrismccausland. com/tour/ for details.