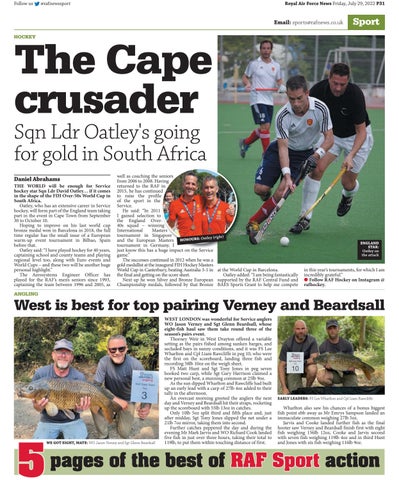 THE WORLD will be enough for Service hockey star Sqn Ldr David Oatley… if it comes in the shape of the FIH Over-50s World Cup in South Africa. Oatley, who has an extensive career in Service hockey, will form part of the England team taking part in the event in Cape Town from September 30 to October 10. Hoping to improve on his last world cup bronze medal won in Barcelona in 2018, the full time regular has the small issue of a European warm-up event tournament in Bilbao, Spain before that. Oatley said: “I have played hockey for 40 years, captaining school and county teams and playing regional level too, along with Euro events and World Cups – and these two will be another huge personal highlight.” The Aerosystems Engineer Officer has played for the RAF’s men’s seniors since 1993, captaining the team between 1996 and 2005, as

well as coaching the seniors from 2006 to 2008. Having returned to the RAF in 2015, he has continued to raise the profile of the sport in the Service. He said: “In 2011 I gained selection to the England Over40s squad – winning International Masters tournament in Singapore tley (right) and the European Masters HONOURS: Oa tournament in Germany, I just know this has a huge impact on the Service game.” The successes continued in 2012 when he was a gold medallist at the inaugural FIH Hockey Masters World Cup in Canterbury, beating Australia 3-1 in at the World Cup in Barcelona. the final and getting on the score sheet. Oatley added: “I am being fantastically Next up he won Silver and Bronze European supported by the RAF Central Fund and Championship medals, followed by that Bronze BAES Sports Grant to help me compete

ENGLAND STAR: Oatley on the attack

in this year’s tournaments, for which I am incredibly grateful.” l Follow RAF Hockey on Instagram @ rafhockey.

West is best for top pairing Verney and Beardsall

WE GOT EIGHT, MATE: WO Jason Verney and Sgt Glenn Beardsall

WEST LONDON was wonderful for Service anglers WO Jason Verney and Sgt Glenn Beardsall, whose eight-fish haul saw them take round three of the season’s pairs event. Thorney Weir in West Drayton offered a variable setting as the pairs fished among sunken barges, and secluded bays in sunny conditions, and it was FS Lee Wharlton and Cpl Liam Rawcliffe in peg 10, who were the first on the scoreboard, landing three fish and recording 58lb 10oz on the weigh sheet. FS Matt Hunt and Sgt Tony Jones in peg seven hooked two carp, while Sgt Gary Harrison claimed a new personal best, a stunning common at 25lb 9oz. As the sun dipped Wharlton and Rawcliffe had built up an early lead with a carp of 27lb 4oz added to their tally in the afternoon. An overcast morning greeted the anglers the next day and Verney and Beardsall hit their straps, rocketing up the scoreboard with 55lb 13oz in catches. Only 10lb 5oz split third and fifth place and, just after midday, Sgt Tony Jones slipped the net under a 21lb 7oz mirror, taking them into second. Further catches peppered the day and during the evening Mr Mark Jarvis and WO Richard Cook landed five fish in just over three hours, taking their total to 119lb, to put them within touching distance of first.

pages of the best of RAF Sport action