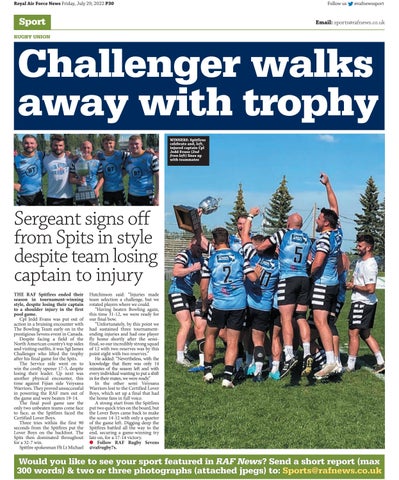 Sergeant signs off from Spits in style despite team losing captain to injury THE RAF Spitfires ended their season in tournament-winning style, despite losing their captain to a shoulder injury in the first pool game. Cpl Jedd Evans was put out of action in a bruising encounter with The Bowling Team early on in the prestigious Sevens event in Canada. Despite facing a field of the North American country’s top sides and visiting outfits, it was Sgt James Challenger who lifted the trophy after his final game for the Spits. The Service side went on to win the costly opener 17-5, despite losing their leader. Up next was another physical encounter, this time against Fijian side Veiysana Warriors. They proved unsuccessful in powering the RAF men out of the game and were beaten 19-14. The final pool game saw the only two unbeaten teams come face to face, as the Spitfires faced the Certified Lover Boys. Three tries within the first 90 seconds from the Spitfires put the Lover Boys on the backfoot. The Spits then dominated throughout for a 32-7 win. Spitfire spokesman Flt Lt Michael

Hutchinson said: “Injuries made team selection a challenge, but we rotated players where we could. “Having beaten Bowling again, this time 31-12, we were ready for our final bow. “Unfortunately, by this point we had sustained three tournamentending injuries and had one player fly home shortly after the semifinal, so our incredibly strong squad of 12 with two reserves was by this point eight with two reserves.” He added: “Nevertheless, with the knowledge that there was only 14 minutes of the season left and with every individual wanting to put a shift in for their mates, we were ready.” In the other semi Veiysana Warriors lost to the Certified Lover Boys, which set up a final that had the home fans in full voice. A strong start from the Spitfires put two quick tries on the board, but the Lover Boys came back to make the score 14-12 with only a quarter of the game left. Digging deep the Spitfires battled all the way to the end, securing a game-winning try late on, for a 17-14 victory. l Follow RAF Rugby Sevens @rafrugby7s.