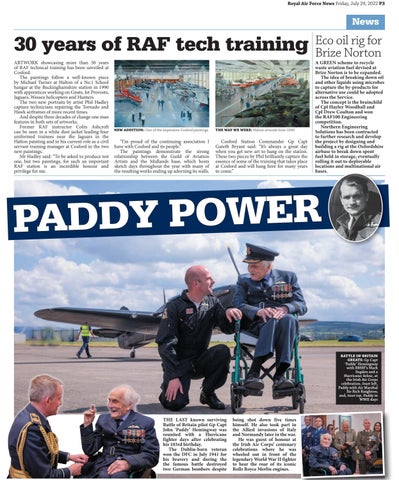 30 years of RAF tech training ARTWORK showcasing more than 30 years of RAF technical training has been unveiled at Cosford. The paintings follow a well-known piece by Michael Turner at Halton of a No.1 School hangar at the Buckinghamshire station in 1990 with apprentices working on Gnats, Jet Provosts, Jaguars, Wessex helicopters and Hunters. The two new portraits by artist Phil Hadley capture technicians repairing the Tornado and Hawk airframes of more recent times. And despite three decades of change one man features in both sets of artworks. Former RAF instructor Colin Ashcroft can be seen in a white dust jacket leading four uniformed trainees near the Jaguars in the Halton painting and in his current role as a civil servant training manager at Cosford in the two new paintings. Mr Hadley said: “To be asked to produce not one, but two paintings, for such an important RAF station is an incredible honour and privilege for me.

NEW ADDITION: One of the impressive Cosford paintings

THE WAY WE WERE: Halton artwork from 1990

“I’m proud of the continuing association I have with Cosford and its people.” The paintings demonstrate the strong relationship between the Guild of Aviation Artists and the Midlands base, which hosts sketch days throughout the year with many of the resulting works ending up adorning its walls.

Cosford Station Commander Gp Capt Gareth Bryant said: “It’s always a great day when you get new art to hang on the station. These two pieces by Phil brilliantly capture the essence of some of the training that takes place at Cosford and will hang here for many years to come.”

A GREEN scheme to recycle waste aviation fuel devised at Brize Norton is to be expanded. The idea of breaking down oil and other liquids using microbes to capture the by-products for alternative use could be adopted across the Service. The concept is the brainchild of Cpl Hayley Woodhall and Cpl Drew Coulton and won the RAF100 Engineering competition. Northern Engineering Solutions has been contracted to further research and develop the project by designing and building a rig at the Oxfordshire airbase to break down spent fuel held in storage, eventually rolling it out to deployable locations and multinational air bases.

THE LAST known surviving Battle of Britain pilot Gp Capt John ‘Paddy’ Hemingway was reunited with a Hurricane fighter days after celebrating his 103rd birthday. The Dublin-born veteran won the DFC in July 1941 for his bravery and during the the famous battle destroyed two German bombers despite

being shot down five times himself. He also took part in the Allied invasions of Italy and Normandy later in the war. He was guest of honour at the Irish Air Corps’ centenary celebrations where he was wheeled out in front of the legendary World War II fighter to hear the roar of its iconic Rolls Royce Merlin engines.