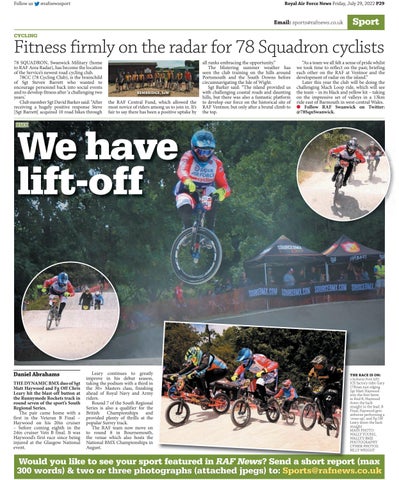 the RAF Central Fund, which allowed the most novice of riders among us to join in. It’s fair to say there has been a positive uptake by

all ranks embracing the opportunity.” The blistering summer weather has seen the club training on the hills around Portsmouth and the South Downs before circumnavigating the Isle of Wight. Sgt Barker said: “The island provided us with challenging coastal roads and daunting hills, but there was also a fantastic platform to develop our force on the historical site of RAF Ventnor, but only after a brutal climb to the top.

“As a team we all felt a sense of pride whilst we took time to reflect on the past; briefing each other on the RAF at Ventnor and the development of radar on the island.” Later this year the club will be doing the challenging Mach Loop ride, which will see the team – in its black and yellow kit – taking on the impressive set of valleys in a 13km ride east of Barmouth in west-central Wales. l Follow RAF Swanwick on Twitter: @78SqnSwanwick.

Daniel Abrahams THE DYNAMIC BMX duo of Sgt Matt Haywood and Fg Off Chris Leary hit the blast-off button at the Runnymede Rockets track in round seven of the sport’s South Regional Series. The pair came home with a first in the Veteran B Final – Haywood on his 20in cruiser – before coming eighth in the 24in cruiser Vets B final. It was Haywood’s first race since being injured at the Glasgow National event.

Leary continues to greatly improve in his debut season, taking the podium with a third in the 30+ Masters class, finishing ahead of Royal Navy and Army riders. Round 7 of the South Regional Series is also a qualifier for the British Championships and provided plenty of thrills at the popular Surrey track. The RAF team now move on to round 8 in Bournemouth, the venue which also hosts the National BMX Championships in August.

THE RACE IS ON: (clockwise from left) left ICE factory rider Gary O’Brian just edging Sgt Matt Haywood into the first berm in Rnd 8; Haywood down the back straight in the lead, B Final; Haywood gets airborne performing a &#39;cross-up&#39;; and Fg Off Leary down the back straight MAIN PHOTO: WALLY YOUNG, WALLY&#39;S BMX PHOTOGRAPHY OTHER PHOTOS: BILLY WRIGHT

Would you like to see your sport featured in RAF News?? Send a short report (max 300 words) &amp; two or three photographs (attached jpegs) to: Sports@rafnews.co.uk