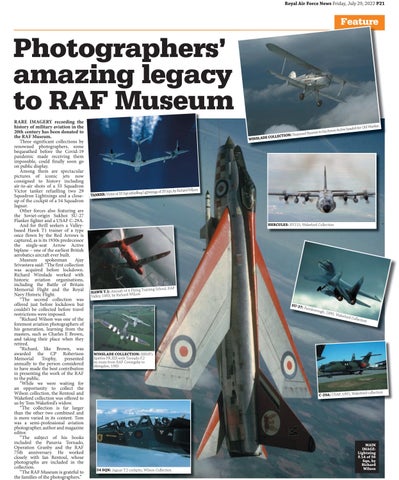 Photographers’ amazing legacy to RAF Museum RARE IMAGERY recording the history of military aviation in the 20th century has been donated to the RAF Museum. Three significant collections by renowned photographers, some bequeathed before the Covid-19 pandemic made receiving them impossible, could finally soon go on public display. Among them are spectacular pictures of iconic jets now consigned to history including air-to-air shots of a 55 Squadron Victor tanker refuelling two 29 Squadron Lightnings and a closeup of the cockpit of a 54 Squadron Jaguar. Other forces also featuring are the Soviet-origin Sukhoi SU-27 Flanker fighter and a USAF C-29A. And for thrill seekers a Valleybased Hawk T1 trainer of a type once flown by the Red Arrows is captured, as is its 1930s predecessor the single-seat Arrow Active biplane – one of the earliest British aerobatics aircraft ever built. Museum spokesman Ajay Srivastava said: “The first collection was acquired before lockdown. Richard Winslade worked with historic aviation organisations, including the Battle of Britain Memorial Flight and the Royal Navy Historic Flight. “The second collection was offered just before lockdown but couldn’t be collected before travel restrictions were imposed. “Richard Wilson was one of the foremost aviation photographers of his generation, learning from the masters, such as Charles E Brown, and taking their place when they retired. “Richard, like Brown, was awarded the CP Robertson Memorial Trophy, presented annually to the person considered to have made the best contribution in presenting the work of the RAF to the public. “While we were waiting for an opportunity to collect the Wilson collection, the Rentoul and Wakeford collection was offered to us by Tom Wakeford’s widow. “The collection is far larger than the other two combined and is more varied in its content. Tom was a semi-professional aviation photographer, author and magazine editor. “The subject of his books included the Panavia Tornado, Operation Granby and the RAF 75th anniversary. He worked closely with Ian Rentoul, whose photographs are included in the collection. “The RAF Museum is grateful to the families of the photographers.”