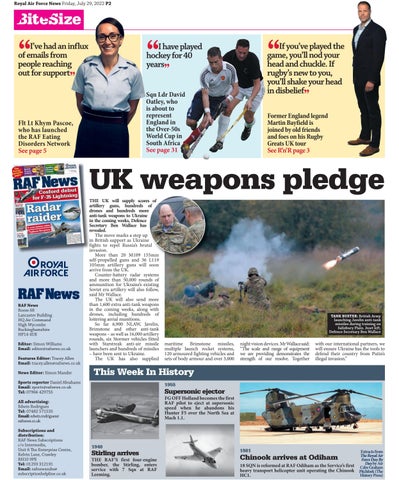 If you’ve played the game, you’ll nod your head and chuckle. If rugby’s new to you, you’ll shake your head in disbelief”

I have played hockey for 40 years” Sqn Ldr David Oatley, who is about to represent England in the Over-50s World Cup in South Africa See page 31

THE UK will supply scores of artillery guns, hundreds of drones and hundreds more anti-tank weapons to Ukraine in the coming weeks, Defence Secretary Ben Wallace has revealed. The move marks a step up in British support as Ukraine fights to repel Russia’s brutal invasion. More than 20 M109 155mm self-propelled guns and 36 L119 105mm artillery guns will soon arrive from the UK. Counter-battery radar systems and more than 50,000 rounds of ammunition for Ukraine’s existing Soviet era artillery will also follow, said Mr Wallace. The UK will also send more than 1,600 extra anti-tank weapons in the coming weeks, along with drones, including hundreds of loitering aerial munitions. So far 6,900 NLAW, Javelin, Brimstone and other anti-tank weapons – as well as 16,000 artillery rounds, six Stormer vehicles fitted with Starstreak anti-air missile launchers and hundreds of missiles – have been sent to Ukraine. The UK has also supplied

night vision devices. Mr Wallace said: “The scale and range of equipment we are providing demonstrates the strength of our resolve. Together

with our international partners, we will ensure Ukraine has the tools to defend their country from Putin’s illegal invasion.”

FG OFF Holland becomes the first RAF pilot to eject at supersonic speed when he abandons his Hunter F5 over the North Sea at Mach 1.1.