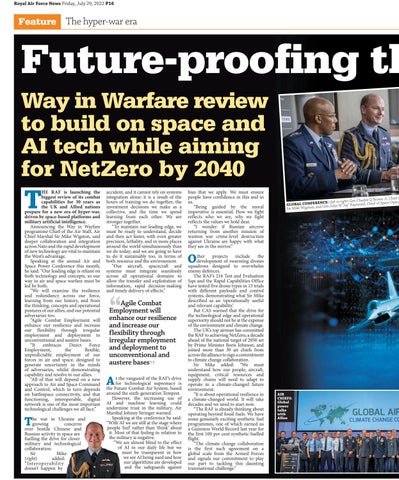 HE RAF is launching the biggest review of its combat capabilities for 30 years as the UK and Allied nations prepare for a new era of hyper-war, driven by space-based platforms and military artificial intelligence. Announcing the Way in Warfare programme Chief of the Air Staff, Air Chief Marshal Sir Mike Wigston, said deeper collaboration and integration across Nato and the rapid development of new technology are vital to maintain the West’s advantage. Speaking at the annual Air and Space Power Conference this month, he said: “Our leading edge is reliant on both technology and concepts, so our way in air and space warfare must be led by both. “We will examine the resilience and redundancy across our force, learning from our history, and from the thinking, concepts and operational postures of our allies, and our potential adversaries too. “Agile Combat Employment will enhance our resilience and increase our flexibility through irregular employment and deployment to unconventional and austere bases. “It embraces Direct Force Employment, the flexible, unpredictable employment of our forces in air and space, designed to generate uncertainty in the minds of adversaries, whilst demonstrating capability and resolve to our allies. “All of that will depend on a new approach to Air and Space Command and Control, which in turn depends on battlespace connectivity, and that functioning, interoperable, digital network is one of the most important technological challenges we all face.”

he war in Ukraine and growing concerns over hostile Chinese and Russian activity in space are fuelling the drive for closer military and technological collaboration. Sir Mike (right) added: “Interoperability doesn’t happen by

accident, and it cannot rely on systems integration alone: it is a result of the hours of training we do together, the investment decisions we make as a collective, and the time we spend learning from each other. We are stronger together. “To maintain our leading edge, we must be ready to understand, decide and then act faster, with even greater precision, lethality, and in more places around the world simultaneously than we do today; and we are going to have to do it sustainably too, in terms of both resource and the environment. “Our aircraft, spacecraft and systems must integrate seamlessly across all operational domains to allow the transfer and exploitation of information, rapid decision-making and timely delivery of effects.”

t the vanguard of the RAF’s drive for technological supremacy is the Future Combat Air System, based around the sixth-generation Tempest. However, the increasing use of AI and machine learning could undermine trust in the military, Air Marshal Johnny Stringer warned. Speaking at the conference he said: “With AI we are still at the stage where people ‘feel’ rather than ‘think’ about it. Most of that feeling in relation to the military is negative. “We are almost blind to the effect of AI in our daily life but we must be transparent in how we see AI being used and how our algorithms are developed and the safeguards against

bias that we apply. We must ensure people have confidence in this and in us. “Being guided by the moral imperative is essential. How we fight reflects who we are, why we fight reflects the values we hold dear. “I wonder if Russian aircrew returning from another mission of wanton war crime-level destruction against Ukraine are happy with what they see in the mirror.”

ther projects include the development of swarming drones squadrons designed to overwhelm enemy defences. The RAF’s 216 Test and Evaluation Sqn and the Rapid Capabilities Office have tested five drone types in 13 trials with different payloads and control systems, demonstrating what Sir Mike described as an ‘operationally useful and relevant capability.’ But CAS warned that the drive for the technological edge and operational superiority should not be at the expense of the environment and climate change. The UK’s top airman has committed the RAF to achieving NetZero, a decade ahead of the national target of 2050 set by Prime Minister Boris Johnson, and joined more than 30 air chiefs from across the alliance to sign a commitment to climate change collaboration. Sir Mike added: “We must understand how our people, aircraft, equipment, critical resources and supply chains will need to adapt to operate in a climate-changed future environment. “It is about operational resilience in a climate-changed world. It will take decades and we need to start now. “The RAF is already thinking about operating beyond fossil fuels. We have some genuinely exciting synthetic fuel programmes, one of which earned us a Guinness World Record last year for the first 100 per cent synthetic fuelled flight. “The climate change collaboration is the first such agreement on a global scale from the Armed Forces and signals our commitment to play our part to tackling this daunting transnational challenge.”