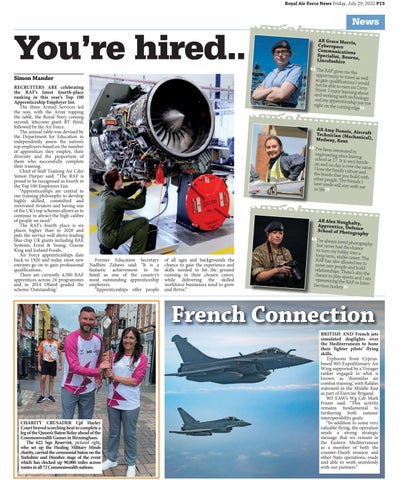 You’re hired.. Simon Mander RECRUITERS ARE celebrating the RAF’s latest fourth-place ranking in this year’s Top 100 Apprenticeship Employer list. The three Armed Services led the way, with the Army topping the table, the Royal Navy coming second, telecoms giant BT third, followed by the Air Force. The annual table was devised by the Department for Education to independently assess the nation’s top employers based on the number of apprentices they employ, their diversity and the proportion of them who successfully complete their training. Chief of Staff Training Air Cdre Simon Harper said: “The RAF is proud to be recognised as fourth in the Top 100 Employers List. “Apprenticeships are central to our training philosophy to develop highly skilled, committed and motivated Aviators and having one of the UK’s top schemes allows us to continue to attract the high calibre of people we need.” The RAF’s fourth place is six places higher than in 2020 and puts the service well above leading blue chip UK giants including BAE Systems, Ernst &amp; Young, Greene King and Iceland Foods. Air Force apprenticeships date back to 1920 and today most new entrants go on to gain professional qualifications. There are currently 4,500 RAF apprentices across 24 programmes and in 2014 Ofsted graded the scheme ‘Outstanding.’

as gain qualification not be able to earn s I would Street. I enjoy learnon Civvy and working with teing about and my apprentices chnology hip right on the cutting put me edge

school at 17. It is ve on and no day is ev ry handser the same. I love the family cultu the bonds that you re and other people. The fribuild with have made will stay ends I with me for life

“buI’vet nealwveayrshalovd edthephchotanogceraphy Former Education Secretary Nadhim Zahawi said: “It is a fantastic achievement to be listed as one of the country’s most outstanding apprenticeship employers. “Apprenticeships offer people

of all ages and backgrounds the chance to gain the experience and skills needed to hit the ground running in their chosen career, while delivering the skilled workforce businesses need to grow and thrive.”

to turn my hobby in long-term, stable ca to a RAF has also allowedreer. The meet new people an me to relationships. There’sd build chance to play spor also the representing the RAts and I am F in InterServices hockey

CHARITY CRUSADER Cpl Hayley Court braved scorching heat to complete a leg of the Queen’s Baton Relay ahead of the Commonwealth Games in Birmingham. The 622 Sqn Reservist, pictured right, who set up the Healing Military Minds charity, carried the ceremonial baton on the Yorkshire and Humber stage of the event which has clocked up 90,000 miles across routes in all 72 Commonwealth nations.

BRITISH AND French jets simulated dogfights over the Mediterranean to hone their fighter pilots’ flying skills. Typhoons from Cyprusbased 903 Expeditionary Air Wing supported by a Voyager tanker engaged in what is known as ‘dissimilar air combat training,’ with Rafales stationed in the Middle East as part of Exercise Brigand. 903 EAW’s Wg Cdr Mark Frazer said: “This activity remains fundamental to furthering both nations’ interoperability goals. “In addition to some very valuable flying, the operation sends a strong strategic message that we remain in the Eastern Mediterranean as a member of both the counter-Daesh mission and other Nato operations, ready and able to work seamlessly with our partners.”