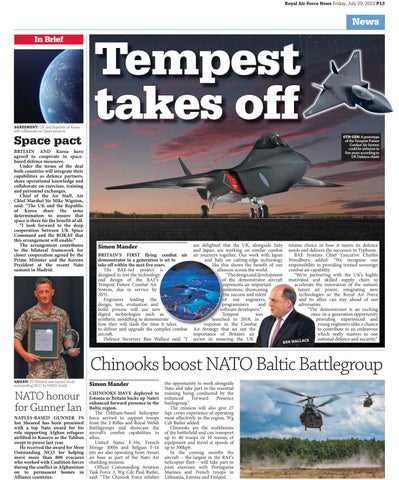 AGREEMENT: UK and Republic of Korea will collaborate on Space projects

Space pact BRITAIN AND Korea have agreed to cooperate in spacebased defence measures. Under the terms of the deal both countries will integrate their capabilities as defence partners, share operational knowledge and collaborate on exercises, training and personnel exchanges. Chief of the Air Staff, Air Chief Marshal Sir Mike Wigston, said: “The UK and the Republic of Korea share the same determination to ensure that space is there for the benefit of all. “I look forward to the deep cooperation between UK Space Command and the ROKAF that this arrangement will enable.” The arrangement contributes to the bilateral framework for closer cooperation agreed by the Prime Minister and the Korean President at the recent Nato summit in Madrid.

6TH-GEN: A prototype of the Tempest Future Combat Air System could be airborne in five years according to UK Defence chiefs

Simon Mander BRITAIN’S FIRST flying combat air demonstrator in a generation is set to take off within the next five years. The BAE-led project is designed to test the technology and design of the RAF’s Tempest Future Combat Air System, due in service by 2035. Engineers leading the design, test, evaluation and build process will use new digital technologies such as synthetic modelling to demonstrate how they will slash the time it takes to deliver and upgrade the complex combat aircraft. Defence Secretary Ben Wallace said: “I

am delighted that the UK, alongside Italy and Japan, are working on similar combat air journeys together. Our work with Japan and Italy on cutting-edge technology like this shows the benefit of our alliances across the world. “The design and development of the demonstrator aircraft represents an important milestone, showcasing the success and talent of our engineers, programmers and software developers.” Tempest was launched in 2018, in response to the Combat Air Strategy that set out the importance of Britain’s air sector in ensuring the UK

retains choice in how it meets its defence needs and delivers the successor to Typhoon. BAE Systems Chief Executive Charles Woodburn added: “We recognise our responsibility in providing trusted sovereign combat air capability. “We’re partnering with the UK’s highly motivated and skilled supply chain to accelerate the innovation of the nation’s future air power; integrating new technologies so the Royal Air Force and its allies can stay ahead of our adversaries. “The demonstrator is an exciting once-in-a-generation opportunity providing experienced and young engineers alike a chance to contribute to an endeavour which really matters to our national defence and security.” WALLACE

NAPLES-BASED GUNNER FS Ian Sheared has been presented with a top Nato award for his role supporting Afghan refugees airlifted to Kosovo as the Taliban swept to power last year. He received the award for Most Outstanding NCO for helping move more than 800 evacuees who worked with Coalition forces during the conflict in Afghanistan on to permanent homes in Alliance countries.

the opportunity to work alongside Nato and take part in the essential training being conducted by the enhanced Forward Presence battlegroup.” The mission will also give 27 Sqn crews experience of operating most effectively in the region, Wg Cdr Butler added. Chinooks are the workhorses of the battlefield and can transport up to 40 troops or 10 tonnes of equipment and travel at speeds of up to 300kph. In the coming months the aircraft – the largest in the RAF’s helicopter fleet – will take part in joint exercises with Portuguese Marines and French troops in Lithuania, Estonia and Finland.