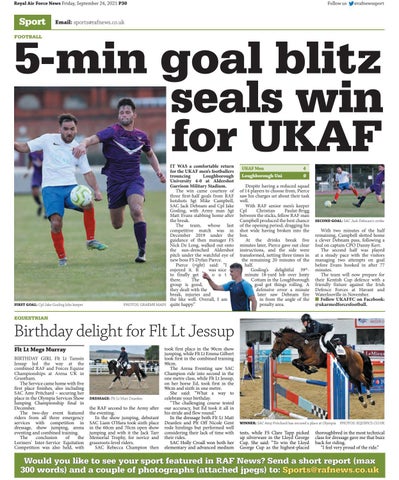 IT WAS a comfortable return for the UKAF men’s footballers trouncing Loughborough University 4-0 at Aldershot Garrison Military Stadium. The win came courtesy of three first-half goals from RAF hotshots Sgt Mike Campbell, SAC Jack Debnam and Cpl Jake Gosling, with Army man Sgt Matt Evans stabbing home after the break. The team, whose last competitive match was in December 2019 under the guidance of then manager FS Nick De Long, walked out onto the sun-drenched Aldershot pitch under the watchful eye of new boss FS Dyfan Pierce. Pierce (right) said: “I enjoyed it. It was nice to finally get o u t there. The group is good, they dealt with the break, injuries and the like well. Overall, I am quite happy.”

Despite having a reduced squad of 14 players to choose from, Pierce saw his charges set about their task well. With RAF senior men’s keeper Cpl Christian Paulat-Brigg between the sticks, fellow RAF man Campbell produced the best chance of the opening period, dragging his shot wide having broken into the box. At the drinks break five minutes later, Pierce gave out clear instructions, and the side were transformed, netting three times in the remaining 20 minutes of the half. Gosling’s delightful 39thminute 18-yard lob over Jonty Cottam in the Loughborough goal got things rolling. A defensive error a minute later saw Debnam fire in from the angle of the penalty area.

With two minutes of the half remaining, Campbell slotted home a clever Debnam pass, following a foul on captain CPO Danny Kerr. The second half was played at a steady pace with the visitors managing two attempts on goal before Evans hooked in after 77 minutes. The team will now prepare for their Kentish Cup defence with a friendly fixture against the Irish Defence Forces at Havant and Waterlooville in November. ■ Follow UKAFFC on Facebook: @ukarmedforcesfootball.

the RAF second to the Army after the eventing. In the show jumping, debutant SAC Liam O’Hara took sixth place in the 60cm and 70cm open show jumping and with it the Jack Tarr Memorial Trophy, for novice and grassroots-level riders. SAC Rebecca Champion then

took first place in the 90cm show jumping, while Flt Lt Emma Gilbert took first in the combined training 90cm. The Arena Eventing saw SAC Champion ride into second in the one metre class, while Flt Lt Jessup, on her horse Ed, took first in the 90cm and sixth in one metre. She said: “What a way to celebrate your birthday. “The challenging course tested our accuracy, but Ed took it all in his stride and flew round.” In the dressage both Flt Lt Matt Dearden and Plt Off Nicole Gent rode hirelings but performed well considering their lack of time with their rides. SAC Holly Croall won both her elementary and advanced medium

WINNER: SAC Amy Pritchard has secured a place at Olympia

thoroughbred in the most technical class for dressage gave me that buzz back for riding. “I feel very proud of the ride.”