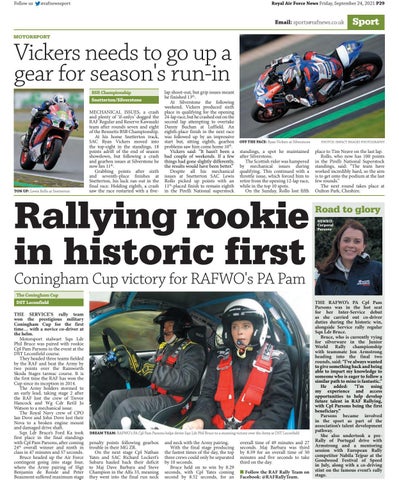 TON UP: Lewis Rollo at Snetterton

MECHANICAL ISSUES, a crash and plenty of ‘if-onlys’ dogged the RAF Regular and Reserve Kawasaki team after rounds seven and eight of the Bennetts BSB Championship. At his home Snetterton track, SAC Ryan Vickers moved into the top-eight in the standings, 18 points adrift of the end of season showdown, but following a crash and gearbox issues at Silverstone he now lies 11th. Grabbing points after sixth and seventh-place finishes at Snetterton, his luck ran out in the final race. Holding eighth, a crash saw the race restarted with a five-

lap shoot-out, but grip issues meant he finished 13th. At Silverstone the following weekend, Vickers produced sixth place in qualifying for the opening 24-lap race, but he crashed out on the second lap attempting to overtake Danny Buchan at Luffield. An eighth-place finish in the next race was followed up by an impressive start but, sitting eighth, gearbox problems saw him come home 10th. Vickers said: “It hasn’t been a bad couple of weekends. If a few things had gone slightly differently, the results would have been better.” Despite all his mechanical issues at Snetterton SAC Lewis Rollo picked up points with an 11th-placed finish to remain eighth in the Pirelli National superstock

OFF THE PACE: Ryan Vickers at Silverstone

standings, a spot he maintained after Silverstone. The Scottish rider was hampered by mechanical issues during qualifying. This continued with a throttle issue, which forced him to retire from the opening 12-lap race, while in the top 10 spots. On the Sunday, Rollo lost fifth

place to Tim Neave on the last lap. Rollo, who now has 100 points in the Pirelli National Superstock standings, said: “The team have worked incredibly hard, so the aim is to get onto the podium at the last few rounds.” The next round takes place at Oulton Park, Cheshire.

Rallying rookie in historic first Coningham Cup victory for RAFWO's PA Pam The Coningham Cup DST Leconfield THE SERVICE’S rally team won the prestigious military Coningham Cup for the first time… with a novice co-driver at the helm. Motorsport stalwart Sqn Ldr Phil Bruce was paired with rookie Cpl Pam Parsons in the event at the DST Leconfield course. They headed three teams fielded by the RAF and beat the Army by two points over the Rainworth Skoda Stages tarmac course. It is the first time the RAF has won the Cup since its inception in 2014. The Army holders stormed to an early lead, taking stage 2 after the RAF lost the crew of Trevor Hancock and Wg Cdr Ret’d Jo Watson to a mechanical issue. The Royal Navy crew of CPO Ian Dove and John Dove lost their Nova to a broken engine mount and damaged drive shaft. Sqn Ldr Bruce’s Ford Ka took first place in the final standings with Cpl Pam Parsons, after coming 24th overall winner and ninth in class in 47 minutes and 57 seconds. Bruce headed up the Air Force contingent going into stage four, where the Army pairing of SSgt Benjamin de Ronde and Peter Beaumont suffered maximum stage

penalty points following gearbox trouble in their MG ZR. On the next stage Cpl Nathan Yates and SAC Richard Lockert’s Subaru hauled back their deficit to Maj Dave Barbara and Steve Champion in the Alfa 33, meaning they went into the final run neck

and neck with the Army pairing. With the final stage producing the fastest times of the day, the top three crews could only be separated by 10 seconds. Bruce held on to win by 8.29 seconds, with Cpl Yates coming second by 8.52 seconds, for an

THE RAFWO’s PA Cpl Pam Parsons was in the hot seat for her Inter-Service debut as she carried out co-driver duties during the historic win, alongside Service rally regular Sqn Ldr Bruce. Bruce, who is currently vying for silverware in the Junior World Rally championship with teammate Jon Armstrong heading into the final two rounds, said: “I’ve always wanted to give something back and being able to impart my knowledge to someone who is eager to follow a similar path to mine is fantastic.” He added: “I’m using my experience and access opportunities to help develop future talent in RAF Rallying, with Cpl Parsons being the first beneficiary.” Parsons became involved in the sport as part of the association’s talent development pathway. She also undertook a preRally of Portugal drive with Armstrong and a mentoring session with European Rally competitor Nabila Tejpar at the Goodwood Festival of Speed in July, along with a co-driving stint on the famous event’s rally stage.