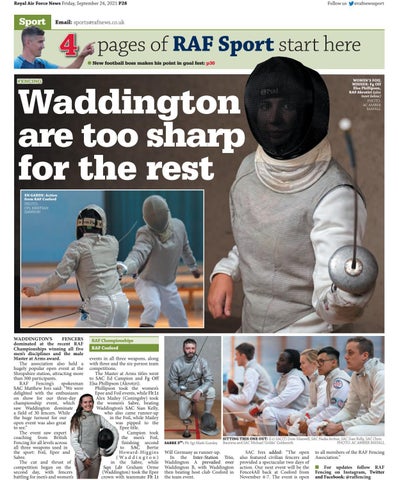 Waddington are too sharp for the rest

WADDINGTON'S FENCERS dominated at the recent RAF Championships winning all five men’s disciplines and the male Master at Arms award. The association also held a hugely popular open event at the Shropshire station, attracting more than 300 participants. RAF Fencing’s spokesman SAC Matthew Ives said: “We were delighted with the enthusiasm on show for our three-day championship event, which saw Waddington dominate a field of 30 fencers. While the huge turnout for our open event was also great to see.” The event saw expert coaching from British Fencing for all levels across all three weapons used in the sport: Foil, Epee and Sabre. The cut and thrust of competition began on the second day, with fencers battling for men’s and women’s

Will Germany as runner-up. In the Inter-Station Trio, Waddington A prevailed over Waddington B, with Waddington then beating host club Cosford in the team event.

SAC Ives added: “The open also featured civilian fencers and provided a spectacular two days of action. Our next event will be the Fence4All back at Cosford from November 4-7. The event is open