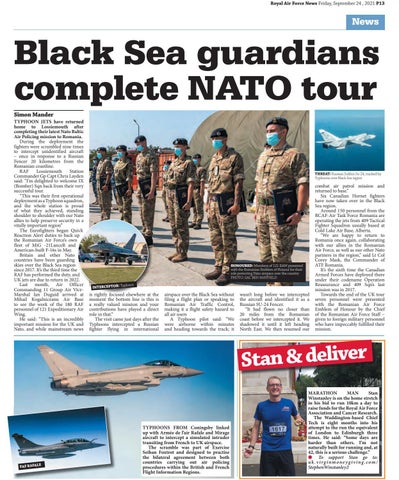 TYPHOON JETS have returned home to Lossiemouth after completing their latest Nato Baltic Air Policing mission to Romania. During the deployment the fighters were scrambled nine times to intercept unidentified aircraft – once in response to a Russian Fencer 20 kilometres from the Romanian coastline. RAF Lossiemouth Station Commander Gp Capt Chris Layden said: “I’m delighted to welcome IX (Bomber) Sqn back from their very successful tour. “This was their first operational deployment as a Typhoon squadron, and the whole station is proud of what they achieved, standing shoulder to shoulder with our Nato allies to help preserve security in a vitally important region” The Eurofighters began Quick Reaction Alert duties to back up the Romanian Air Force’s own fleet of MiG -21LanceR and American-built F-16s in May. Britain and other Nato countries have been guarding skies over the Black Sea region since 2017. It’s the third time the RAF has performed the duty, and UK jets are due to return in 2022. Last month, Air Officer Commanding 11 Group Air ViceMarshal Ian Duguid arrived at Mihail Kogalniceanu Air Base to see the work of the 180 RAF personnel of 121 Expeditionary Air Wing. He said: “This is an incredibly important mission for the UK and Nato, and while mainstream news

is rightly focused elsewhere at the moment the bottom line is this is a really valued mission and your contributions have played a direct role in that.” The visit came just days after the Typhoons intercepted a Russian fighter flying in international

airspace over the Black Sea without filing a flight plan or speaking to Romanian Air Traffic Control, making it a flight safety hazard to all air users A Typhoon pilot said: “We were airborne within minutes and heading towards the track; it

combat air patrol mission and returned to base.” Six Canadian Hornet fighters have now taken over in the Black Sea region. Around 150 personnel from the RCAF-Air Task Force Romania are operating the jets from 409 Tactical Fighter Squadron usually based at Cold Lake Air Base, Alberta. “We are happy to return to Romania once again, collaborating with our allies in the Romanian Air Force, as well as our other Nato partners in the region,” said Lt Col Corey Mask, the Commander of ATF Romania. It’s the sixth time the Canadian Armed Forces have deployed there under their codename Operation Reassurance and 409 Sqn’s last mission was in 2017. Towards the end of the UK tour seven personnel were presented with the Romanian Air Force Emblem of Honour by the Chief of the Romanian Air Force Staff – given to foreign military personnel who have impeccably fulfilled their mission.

TYPHOONS FROM Coningsby linked up with Armée de l’air Rafale and Mirage aircraft to intercept a simulated intruder transiting from French to UK airspace. The scramble was part of Exercise Seihan Foxtrot and designed to practise the bilateral agreement between both countries carrying out air policing procedures within the British and French Flight Information Regions.

MARATHON MAN Stan Winstanley is on the home stretch in his bid to run 10km a day to raise funds for the Royal Air Force Association and Cancer Research. The Waddington-based Chief Tech is eight months into his attempt to the run the equivalent of London to Edinburgh three times. He said: “Some days are harder than others. I’m not naturally built for running and, at 42, this is a serious challenge.” To support Stan go to: uk.virginmoneygiving.com/ StephenWinstanley2