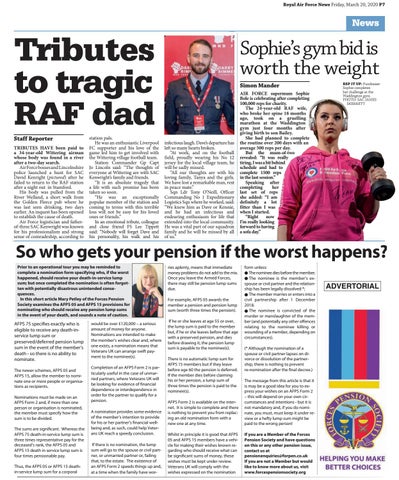 Tributes to tragic RAF dad Staff Reporter TRIBUTES HAVE been paid to a 34-year-old Wittering airman whose body was found in a river after a two-day search. Air Force bosses and Lincolnshire police launched a hunt for SAC David Kenright (pictured) after he failed to return to the RAF station after a night out in Stamford. His body was pulled from the River Welland, a short walk from the Golden Fleece pub where he was last seen drinking, two days earlier. An inquest has been opened to establish the cause of death. Air Force logistician and fatherof-three SAC Kenwright was known for his professionalism and strong sense of comradeship, according to

station pals. He was an enthusiastic Liverpool FC supporter and his love of the game led him to get involved with the Wittering village football team. Station Commander Gp Capt Jo Lincoln said: “The thoughts of everyone at Wittering are with SAC Kenwright’s family and friends. “It is an absolute tragedy that a life with such promise has been taken so soon. “He was an exceptionally popular member of the station and coming to terms with this terrible loss will not be easy for his loved ones or friends.” In an emotional tribute, colleague and close friend FS Lee Tippett said: “Nobody will forget Dave and his personality, his walk and his

Sophie’s gym bid is worth the weight Simon Mander

infectious laugh. Dave’s departure has left so many hearts broken. “At work, and on the football field, proudly wearing his No 12 jersey for the local village team, he will be sadly missed. “All our thoughts are with his loving family, Tanya and the girls. We have lost a remarkable man, rest in peace mate.” Sqn Ldr Tony O’Neill, Officer Commanding No 1 Expeditionary Logistics Sqn where he worked, said: “We knew him as Dave or Kennie, and he had an infectious and endearing enthusiasm for life that extended into the local community. He was a vital part of our squadron family and he will be missed by all of us.”

AIR FORCE supermum Sophie Bole is celebrating after completing 100,000 reps for charity. The 24-year-old RAF wife, who broke her spine 18 months ago, took on a gruelling marathon at the Waddington gym just four months after giving birth to son Bailey. She had planned to complete the routine over 200 days with an average 500 reps per day. But the mum-of-two revealed: “It was really tiring, I was a bit behind schedule and had to complete 1500 reps in the last session.” Speaking after completing her last set of reps she added: “I am definitely a lot fitter than I was when I started. “Right now I’m really looking forward to having a sofa day.”

REP IT UP: Fundraiser Sophie completes her challenge at the Waddington gym. PHOTO: SAC JAMES SKERRETT

So who gets your pension if the worst happens? Prior to an operational tour you may be reminded to complete a nomination form specifying who, if the worst happened, should receive your death-in-service lump sum; but once completed the nomination is often forgotten with potentially disastrous unintended consequences. In this short article Mary Petley of the Forces Pension Society examines the AFPS 05 and AFPS 15 provisions for nominating who should receive any pension lump sums in the event of your death, and sounds a note of caution.

AFPS 75 specifies exactly who is eligible to receive any death-inservice lump sum or preserved/deferred pension lump sum in the event of the member’s death - so there is no ability to nominate. The newer schemes, AFPS 05 and AFPS 15, allow the member to nominate one or more people or organisations as recipients. Nominations must be made on an AFPS Form 2 and, if more than one person or organisation is nominated, the member must specify how the sum is to be divided. The sums are significant. Whereas the AFPS 75 death-in-service lump sum is three times representative pay for the deceased’s rank, the AFPS 05 and AFPS 15 death in service lump sum is four times pensionable pay. Thus, the AFPS 05 or AFPS 15 deathin-service lump sum for a corporal

would be over £120,000 – a serious amount of money for anyone. Nominations are intended to make the member’s wishes clear and, where one exists, a nomination means that Veterans UK can arrange swift payment to the nominee(s). Completion of an AFPS Form 2 is particularly useful in the case of unmarried partners, where Veterans UK will be looking for evidence of financial dependence or interdependence in order for the partner to qualify for a pension. A nomination provides some evidence of the member’s intention to provide for his or her partner’s financial wellbeing and, as such, could help Veterans UK reach a speedy conclusion. If there is no nomination, the lump sum will go to the spouse or civil partner, or unmarried partner or, failing that, to the estate. The existence of an AFPS Form 2 speeds things up and, at a time when the family have wor-

AFPS Form 2 is available on the internet. It is simple to complete and there is nothing to prevent you from replacing an old nomination form with a new one at any time.

The message from this article is that it is may be a good idea for you to express your wishes on an AFPS Form 2 – this will depend on your own circumstances and intentions - but it is not mandatory and, if you do nominate, you must, must keep it under review or a hefty lump sum might be paid to the wrong person!

Whilst in principle it is good that AFPS 05 and AFPS 15 members have a vehicle for making their wishes known regarding who should receive what can be significant sums of money, these wishes must be kept under review. Veterans UK will comply with the wishes expressed on the nomination

If you are a Member of the Forces Pension Society and have questions on this or any other pension issue, contact us at pensionenquiries@forpen.co.uk If you are not a Member but would like to know more about us, visit www.forcespensionsociety.org