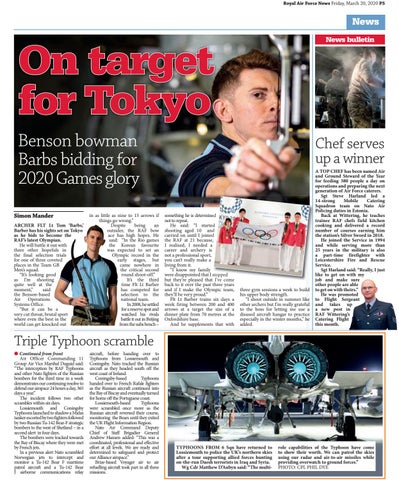 On target for Tokyo

Benson bowman Barbs bidding for 2020 Games glory Simon Mander ARCHER FLT Lt Tom ‘Barbs,’ Barber has his sights set on Tokyo as he bids to become the RAF’s latest Olympian. He will battle it out with three other hopefuls in the final selection trials for one of three coveted places in the Team GB Men’s squad. “It’s looking good as I’m shooting quite well at the moment,” said the Benson-based Air Operations Systems Office. “But it can be a very cut throat, brutal sport where even the best in the world can get knocked out

in as little as nine to 15 arrows if things go wrong.” Despite being an outsider, the RAF bow ace has high hopes. He said: “In the Rio games the Korean favourite was expected to set an Olympic record in the early stages, but came nowhere in the critical second round shoot-off.” It’s the third time Flt Lt Barber has competed for selection to the national team. In 2008, he settled for a reserve spot and watched his rivals battle it out in Beijing from the subs bench –

Chef serves up a winner

something he is determined not to repeat. He said: “I started shooting aged 10 and carried on until I joined the RAF at 21 because, I realised, I needed a career and archery is not a professional sport, you can’t really make a living from it. “I know my family were disappointed that I stopped but they’re pleased that I’ve come back to it over the past three years and if I make the Olympic team, they’ll be very proud.” Flt Lt Barber trains six days a week firing between 200 and 400 arrows at a target the size of a dinner plate from 70 metres at the Oxfordshire base. And he supplements that with

three gym sessions a week to build his upper body strength. “I shoot outside in summer like other archers but I’m really grateful to the boss for letting me use a disused aircraft hangar to practice especially in the winter months,” he added.

A TOP CHEF has been named Air and Ground Steward of the Year for feeding 380 people a day on operations and preparing the next generation of Air Force caterers. Sgt Steve Harland led a 14-strong Mobile Catering Squadron team on Nato Air Policing duties in Estonia. Back at Wittering, he teaches trainee RAF chefs field kitchen cooking and delivered a record number of courses earning him the station’s Silver Sword in 2018. He joined the Service in 1994 and while serving more than 25 years in the military is also a part-time firefighter with Leicestershire Fire and Rescue Service. Sgt Harland said: “Really, I just like to get on with my job and make sure other people are able to get on with theirs.” He was promoted to Flight Sergeant and takes up a new post in RAF Wittering’s Catering Flight this month.

Triple Typhoon scramble ● Continued from front Air Officer Commanding 11 Group Air Vice Marshal Duguid said: “The interception by RAF Typhoons and other Nato fighters of the Russian bombers for the third time in a week demonstrates our continuing resolve to defend our airspace 24 hours a day, 365 days a year.” The incident follows two other scrambles within six days. Lossiemouth and Coningsby Typhoons launched to shadow a Midas tanker escorted by two fighters followed by two Russian Tu-142 Bear-F strategic bombers to the west of Shetland – in a second alert in four days. The bombers were tracked towards the Bay of Biscay where they were met by French jets. In a previous alert Nato scrambled Norwegian jets to intercept and monitor a Tu-142 Bear F maritime patrol aircraft and a Tu-142 Bear J airborne communications relay

aircraft, before handing over to Typhoons from Lossiemouth and Coningsby. Nato tracked the Russian aircraft as they headed south off the west coast of Ireland. Coningsby-based Typhoons handed over to French Rafale fighters as the Russian aircraft continued into the Bay of Biscay and eventually turned for home off the Portuguese coast. Lossiemouth-based Typhoons were scrambled once more as the Russian aircraft reversed their course, monitoring the Bears until they exited the UK Flight Information Region. Nato Air Command Deputy Chief of Staff Brigadier General Andrew Hansen added: “This was a coordinated, professional and effective effort at all levels. We are ready and determined to safeguard and protect our Alliance airspace.” Brize-based Voyager air to air refuelling aircraft took part in all three missions.

role capabilities of the Typhoon have come to show their worth. We can patrol the skies using our radar and air-to-air missiles while providing overwatch to ground forces.” PHOTO: CPL PHIL DYE