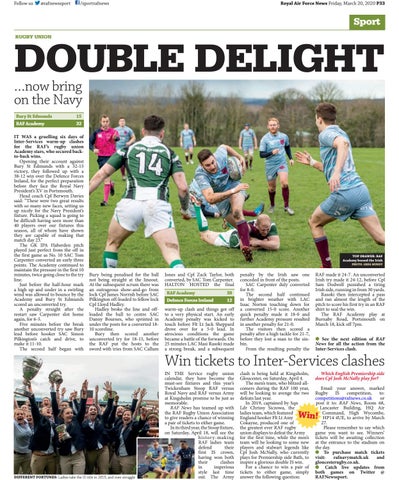 IT WAS a gruelling six days of Inter-Services warm-up clashes for the RAF’s rugby union Academy stars, who secured backto-back wins. Opening their account against Bury St Edmunds with a 32-15 victory, they followed up with a 38-12 win over the Defence Forces Ireland, for the perfect preparation before they face the Royal Navy President’s XV in Portsmouth. Head coach Cpl Berwyn Davies said: “These were two great results with so many new faces, setting us up nicely for the Navy President’s fixture. Picking a squad is going to be difficult having seen more than 40 players over our fixtures this season, all of whom have shown they are capable of making that match day 23.” The GK IPA Haberden pitch played just perfect from the off in the first game as No. 10 SAC Tom Carpenter converted an early three points. The Academy continued to maintain the pressure in the first 10 minutes, twice going close to the try line. Just before the half-hour mark a high up and under in a swirling wind was allowed to bounce by the Academy and Bury St Edmunds scored an unconverted try. A penalty straight after the restart saw Carpenter slot home again, for 6-5. Five minutes before the break another unconverted try saw Bury lead before hooker SAC Simon Pilkington’s catch and drive, to make it 11-10. The second half began with

Bury being penalised for the ball not being straight at the lineout. At the subsequent scrum there was an outrageous show-and-go from lock Cpl James Norrish before SAC Pilkington off-loaded to fellow lock Cpl Lloyd Hadley. Hadley broke the line and offloaded the ball to centre SAC Danny Bournes, who sprinted in under the posts for a converted 1810 scoreline. Bury then scored another unconverted try for 18-15, before the RAF put the hosts to the sword with tries from SAC Callum

DIFFERENT FORTUNES: Ladies take the IS title in 2019, and men struggle

warm-up clash and things got off to a very physical start. An early Academy penalty was kicked to touch before Flt Lt Jack Sheppard drove over for a 5-0 lead. In atrocious conditions the game became a battle of the forwards. On 25 minutes LAC Masi Rasoki made a strong break, and a subsequent

penalty by the Irish saw one conceded in front of the posts. SAC Carpenter duly converted for 8-0. The second half continued in brighter weather with LAC Issac Norton touching down for a converted 15-0 score. Another quick penalty made it 18-0 and further Academy pressure resulted in another penalty for 21-0. The visitors then scored a penalty after a high tackle for 21-7, before they lost a man to the sinbin. From the resulting penalty the

RAF made it 24-7. An unconverted Irish try made it 24-12, before Cpl Sam Dodwell punished a tiring Irish side, running in from 30 yards. Rasoki then intercepted a pass and ran almost the length of the pitch to score his first try in an RAF shirt to seal the win. The RAF Academy play at Burnaby Road, Portsmouth on March 18, kick off 7pm.

IN THE Service rugby union calendar, they have become the must-see fixtures and this year’s Twickenham Stoop RAF versus Royal Navy and RAF versus Army at Kingsholm promise to be just as memorable. RAF News has teamed up with the RAF Rugby Union Association to give readers a chance of winning a pair of tickets to either game. In its third year, the Stoop fixture, on Saturday, April 18, will see the histor y-making RAF ladies team defend their first IS crown, having won both their clashes in imperious style last time out. The Army

clash is being held at Kingsholm, Gloucester, on Saturday, April 4. The men’s team, who blitzed allcomers during the RAF 100 year, will be looking to avenge the two defeats last year. In 2019, captained by Sqn Ldr Chrissy Siczowa, the ladies team, which featured England hooker Flt Lt Amy Cokayne, produced one of the greatest ever RAF rugby union displays to defeat the Army for the first time, while the men’s team will be looking to some new players and stalwart legends like Cpl Josh McNally, who currently plays for Premiership side Bath, to inspire a glorious double IS win. For a chance to win a pair of tickets to either game, simply answer the following question:

Which English Premiership side does Cpl Josh McNally play for?

l See the next edition of RAF News for all the action from the Inter-Services clash.

Win tickets to Inter-Services clashes Email your answer, marked Rugby IS competition, to: competitions@rafnews.co.uk or post it to: RAF News, Room 68, Lancaster Building, HQ Air Command, High Wycombe, HP14 4UE, to arrive by March 27. Please remember to say which game you want to see. Winners’ tickets will be awaiting collection at the entrance to the stadium on the day. l To purchase match tickets visit: rafnavymatch.uk and gloucesterugby.co.uk. l Catch live updates from both games on Twitter @ RAFNewssport.