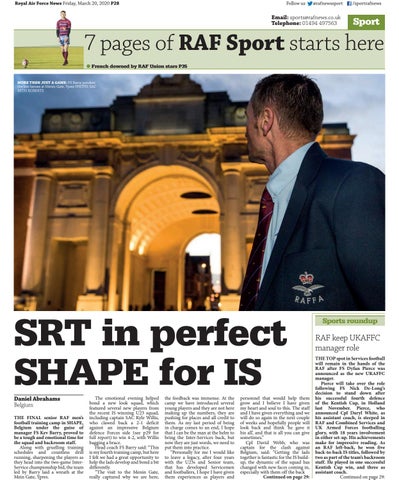 SRT in perfect SHAPE for IS Sport head

THE FINAL senior RAF men’s football training camp in SHAPE, Belgium under the guise of manager FS Kev Barry, proved to be a tough and emotional time for the squad and backroom staff. Along with gruelling training schedules and countless drill running, sharpening the players as they head into the two-game InterService championship bid, the team led by Barry laid a wreath at the Mein Gate, Ypres.

The emotional evening helped bond a new look squad, which featured several new players from the recent IS winning U23 squad, including captain SAC Kyle Willis, who clawed back a 2-1 deficit against an impressive Belgium defence Forces side (see p29 for full report) to win 4-2, with Willis bagging a brace. Head coach FS Barry said: “This is my fourth training camp, but here I felt we had a great opportunity to help the lads develop and bond a bit differently. “The visit to the Menin Gate, really captured why we are here,

the feedback was immense. At the camp we have introduced several young players and they are not here making up the numbers, they are pushing for places and all credit to them. As my last period of being in charge comes to an end, I hope that I can be the man at the helm to bring the Inter-Services back, but now they are just words, we need to put them into practice. “Personally for me I would like to leave a legacy, after four years with the U23s and Senior team, that has developed Servicemen and footballers, I hope I have given them experiences as players and

personnel that would help them grow and I believe I have given my heart and soul to this. The staff and I have given everything and we will do so again in the next couple of weeks and hopefully people will look back and think ‘he gave it his all’, and that is all you can give sometimes.” Cpl David Webb, who was captain for the clash against Belgium, said: “Getting the lads together is fantastic for the IS buildup, the dynamic of the squad has changed with new faces coming in, especially with them off the back Continued on page 29:

RAF keep UKAFFC manager role THE TOP spot in Services football will remain in the hands of the RAF after FS Dyfan Pierce was announced as the new UKAFFC manager. Pierce will take over the role following FS Nick De-Long’s decision to stand down after his successful fourth defence of the Kentish Cup, in Holland last November. Pierce, who announced Cpl Daryl White, as his assistant coach, is steeped in RAF and Combined Services and UK Armed Forces footballing glory, with 18 years involvement in either set-up. His achievements make for impressive reading. As an RAF left-back, he won five back-to-back IS titles, followed by two as part of the team’s backroom staff. He played in one successful Kentish Cup win, and three as assistant coach. Continued on page 29: