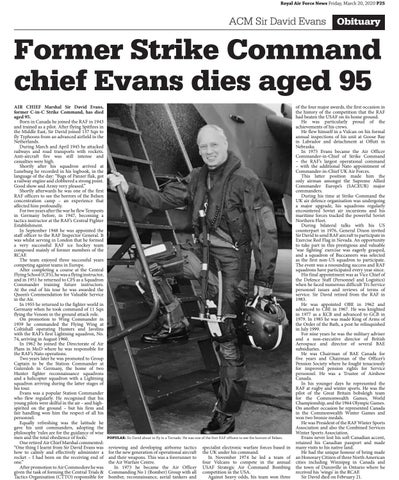 Former Strike Command chief Evans dies aged 95 AIR CHIEF Marshal Sir David Evans, former C-in-C Strike Command, has died aged 95. Born in Canada he joined the RAF in 1943 and trained as a pilot. After flying Spitfires in the Middle East, Sir David joined 137 Sqn to fly Typhoons from an advanced airfield in the Netherlands. During March and April 1945 he attacked railways and road transports with rockets. Anti-aircraft fire was still intense and casualties were high. Shortly after his squadron arrived at Luneburg he recorded in his logbook, in the language of the day: “Bags of Panzer flak, got a railway engine and clobbered a strong point. Good show and Army very pleased.” Shortly afterwards he was one of the first RAF officers to see the horrors of the Belsen concentration camp – an experience that affected him profoundly. For two years after the war he flew Tempests in Germany before, in 1947, becoming a tactics instructor at the RAF’s Central Fighter Establishment. In September 1948 he was appointed the staff officer to the RAF Inspector General. It was whilst serving in London that he formed a very successful RAF ice hockey team composed mainly of former members of the RCAF. The team enjoyed three successful years competing against teams in Europe. After completing a course at the Central Flying School (CFS), he was a flying instructor, and in 1951 he returned to CFS as a Squadron Commander training future instructors. At the end of his tour he was awarded the Queen’s Commendation for Valuable Service in the Air. In 1955 he returned to the fighter world in Germany when he took command of 11 Sqn flying the Venom in the ground attack role. On promotion to Wing Commander in 1959 he commanded the Flying Wing at Coltishall operating Hunters and Javelins with the RAF’s first Lightning squadron, No. 74, arriving in August 1960. In 1962 he joined the Directorate of Air Plans in MoD where he was responsible for the RAF’s Nato operations. Two years later he was promoted to Group Captain to be the Station Commander at Gutersloh in Germany, the home of two Hunter fighter reconnaissance squadrons and a helicopter squadron with a Lightning squadron arriving during the latter stages of his tour. Evans was a popular Station Commander who flew regularly. He recognised that his young pilots were skilful in the air – and highspirited on the ground – but his firm and fair handling won him the respect of all his personnel. Equally refreshing was the latitude he gave his unit commanders, adopting the philosophy ‘rules are for the guidance of wise men and the total obedience of fools.’ One retired Air Chief Marshal commented: “One thing I learnt from Sir David Evans was how to calmly and effectively administer a rocket – I had been on the receiving end of one.” After promotion to Air Commodore he was given the task of forming the Central Trials & Tactics Organisation (CTTO) responsible for

POPULAR: Sir David about to fly in a Tornado. He was one of the first RAF officers to see the horrors of Belsen.

reviewing and developing airborne tactics for the new generation of operational aircraft and their weapons. This was a forerunner to the Air Warfare Centre. In 1973 he became the Air Officer Commanding No 1 (Bomber) Group with all bomber, reconnaissance, aerial tankers and

specialist electronic warfare forces based in the UK under his command. In November 1974 he led a team of four Vulcans to compete in the annual USAF Strategic Air Command Bombing competition in the USA. Against heavy odds, his team won three

of the four major awards, the first occasion in the history of the competition that the RAF had beaten the USAF on its home ground. He was particularly proud of the achievements of his crews. He flew himself in a Vulcan on his formal annual inspections of his unit at Goose Bay in Labrador and detachment at Offutt in Nebraska. In 1975 Evans became the Air Officer Commander-in-Chief of Strike Command – the RAF’s largest operational command – with the additional Nato appointment of Commander-in-Chief UK Air Forces. This latter position made him the only airman amongst the Supreme Allied Commander Europe’s (SACEUR) major commanders. During his time at Strike Command the UK air defence organisation was undergoing a major upgrade, his squadrons regularly encountered Soviet air incursions and his maritime forces tracked the powerful Soviet Northern Fleet. During bilateral talks with his US counterpart in 1976, General Dixon invited Sir David to send RAF aircraft to participate in Exercise Red Flag in Nevada. An opportunity to take part in this prestigious and valuable ‘war fighting’ exercise was eagerly grasped, and a squadron of Buccaneers was selected as the first non-US squadron to participate. The event was a resounding success and RAF squadrons have participated every year since. His final appointment was as Vice Chief of the Defence Staff (Personnel and Logistics) when he faced numerous difficult Tri-Service personnel issues and reviews of terms of service. Sir David retired from the RAF in 1983. He was appointed OBE in 1962 and advanced to CBE in 1967. He was knighted in 1977 as a KCB and advanced to GCB in 1979. In 1985 he was made King of Arms of the Order of the Bath, a post he relinquished in July 1999. For nine years he was the military adviser and a non-executive director of British Aerospace and director of several BAE subsidiaries. He was Chairman of BAE Canada for five years and Chairman of the Officer’s Pension Society where he fought tenaciously for improved pension rights for Service personnel. He was a Trustee of Airshow Canada. In his younger days he represented the RAF at rugby and winter sports. He was the pilot of the Great Britain bobsleigh team for the Commonwealth Games, World Championship, and the 1964 Olympic Games. On another occasion he represented Canada in the Commonwealth Winter Games and won two bronze medals. He was President of the RAF Winter Sports Association and also the Combined Services Winter Sports Association. Evans never lost his soft Canadian accent, retained his Canadian passport and made many visits to his native land. He had the unique honour of being made an Honorary Citizen of three North American cities including Winnipeg in Canada and the town of Dunnville in Ontario where he received his ‘wings’ in the RCAF. Sir David died on February 21.