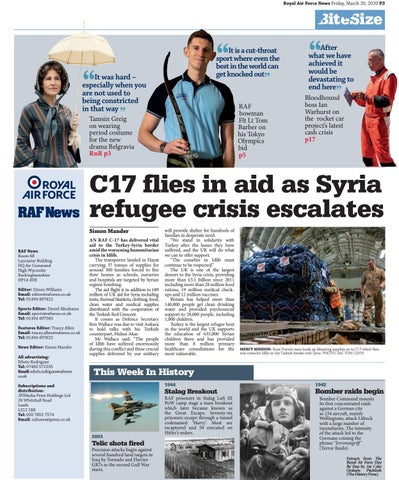 AN RAF C-17 has delivered vital aid to the Turkey-Syria border amid the worsening humanitarian crisis in Idlib. The transporter landed in Hayat carrying 37 tonnes of supplies for around 300 families forced to flee their homes as schools, nurseries and hospitals are targeted by Syrian regime bombing. The aid flight is in addition to £89 million of UK aid for Syria including tents, thermal blankets, clothing, food, clean water and medical supplies distributed with the cooperation of the Turkish Red Crescent. It comes as Defence Secretary Ben Wallace was due to visit Ankara to hold talks with his Turkish counterpart, Hulusi Akar. Mr Wallace said: “The people of Idlib have suffered enormously during this conflict and these crucial supplies delivered by our military

will provide shelter for hundreds of families in desperate need. “We stand in solidarity with Turkey after the losses they have suffered, and the UK will do what we can to offer support. “The ceasefire in Idlib must continue to be respected.” The UK is one of the largest donors to the Syria crisis, providing more than £3.1 billion since 2011 including more than 28 million food rations, 19 million medical checkups and 12 million vaccines. Britain has helped more than 140,000 people get clean drinking water and provided psychosocial support to 28,000 people, including 1,000 children. Turkey is the largest refugee host in the world and the UK supports the education of 635,000 Syrian children there and has provided more than 8 million primary healthcare consultations for the most vulnerable.

This Week In History ‘

RAF prisoners in Stalag Luft III PoW camp stage a mass breakout which later became known as the Great Escape. Seventy-six prisoners escape through a tunnel codenamed ‘Harry’. Most are recaptured and 50 executed on Hitler’s orders.

Bomber raids begin Bomber Command mounts its first concentrated raids against a German city as 234 aircraft, mainly Wellingtons, attack Lübeck with a large number of incendiaries. The intensity of the attack led to the Germans coining the phrase ‘Terrorangriff ’ (Terror Raids). Extracts from The Royal Air Force Day By Day by Air Cdre Graham Pitchfork (The History Press).